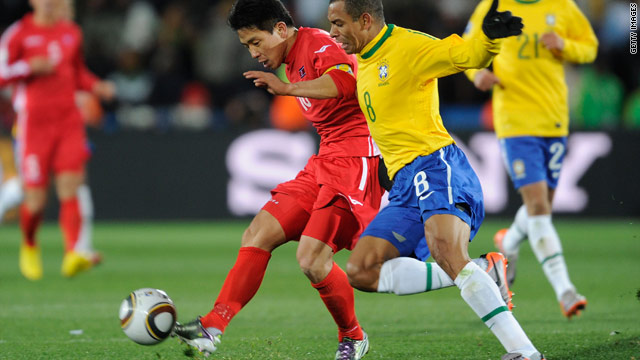 As World Cup action has heated up on the field, so have clicks about the tournament on the internet.
STORY HIGHLIGHTS
RELATED TOPICS

(CNN) -- It's not as audible as the noise from vuvuzelas, but internet buzz over the 2010 FIFA World Cup has observers calling the tournament the biggest event in Web history.

The tournament has surpassed the historic election of President Obama, which held that honor until now.

According to Akamai, a content delivery network, the Web peaked at more than 12 million users per minute just two hours after the kickoff between South Africa and Mexico.

By comparison, about 8.5 million people were logging on per minute the November evening that Obama was elected in 2008.

Noisemakers were also sounding out on Twitter, which has been seeing big spikes in the number of tweets every time a big goal is scored.

The site, which sees a daily average of 750 tweets per second, recorded a skyrocketing 2,940 after Japan scored against Cameroon last Monday.

Nearly as much traffic was reported after Brazil's first goal against North Korea in its 2-1 victory that same day, as well as after Mexico's tying goal against South Africa on June 11.

Still, it was an American favorite that scored Twitter's single-biggest moment. The Los Angeles Lakers' victory against the Boston Celtics at the NBA Championship last Thursday generated a record 3,085 tweets per second as the game ended.

Read about fans keeping track of matches during office hours.

Nonetheless, World Cup numbers have been so consistently high that Twitter was struggling to keep its ship afloat. The social networking site reported several outages attributed to high traffic specific to the World Cup.

The site said on its blog that it is "making real-time adjustments so that we can grow our capacity and avoid outages during the World Cup," and will allow users to monitor the status of the site.

And it's not just the average (or angry) soccer fan who's tweeting. When the United States was denied a miracle comeback against Slovenia last week after a referee's controversial, late-game call, FIFA President Sepp Blatter turned to Twitter for a "response" to the resulting hullabaloo.

He wrote: "Thanks for all the questions on refereeing. My views on improving refs and video technology are here." The link directs readers to a statement he made in March, explaining why there would be no instant replay at the World Cup, or anywhere else in world soccer, reported TIME.com.

Twitter said Monday it could not immediately provide statistics on the number of tweets it received during that match.

Blatter has been tweeting regularly since the start of the matches, with his vuvuzela tweet attracting nine followers per second, according to FIFA.

It's a similar picture on TV. According to a report in Mediaweek, the first 14 matches of the World Cup, as seen on ESPN and ABC, have delivered an average of about 3.3 million viewers, which is a 64 percent increase from the same period in 2006, CNN.com reported Monday.

The U.S.-England match, which ended in a tie June 12, drew 13 million viewers to ABC, making it the most-watched first round World Cup game in U.S. broadcast history.