How 'Annoying Orange' is taking over the world 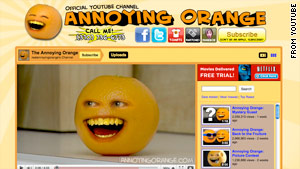 (CNN) -- About as mature as a third-grade boy, the comedy web series "The Annoying Orange" proves once again that everyone secretly loves corny jokes.

The semi-animated shorts, appearing on YouTube and elsewhere, generally feature the titular orange talking to another food, such as an apple or a pizza.

The daft but relentless orange pelts them with asinine jokes, including those of the classic "Orange you glad?" variety. Launched earlier this year by animator Daneboe of GagFilms, "Annoying Orange" has amassed a hefty 137 million views.

What does the unlikely success of "Annoying Orange," say about the web, and entertainment in general?

1. Short is in. The average Annoying Orange episode is about a minute. It is simple, bite-sized and addictive -- practically requiring people to jump from one show to the next.

2. The web's a money-maker. Internet businesses make it easier for free web series like "Annoying Orange" to make an actual profit.

Fans can visit the "Annoying Orange" YouTube page for t-shirts done by SpreadShirt and, via YouTube's ad program, Daneboe can make money on every view.

It may be pennies on each visit, but it becomes serious dough when you're talking millions of visits. "Annoying Orange" holds several top 20 spots on YouTube, including among the most-subscribed channels of all time.

3. People are noticing. The biggest proof of impact might be what some call a rip-off of the series in TV ads for Nabisco Cheez-Its.

Set in a lab, a food scientist is verbally insulted by a wheel of cheddar cheese which he deems not "mature" enough.

Should the "Annoying Orange" team be getting a payoff from Nabisco?Judge for yourself.