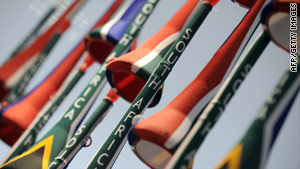 (CNET) -- Dissatisfied with what he sees as tepid effort on behalf of oil giant BP to stop the flow of petroleum from an exploded well in the Gulf of Mexico, a New York-based video producer named Adam Quirk has started raising money for a stunt designed to irritate its executives.

His plan is to serenade them with vuvuzelas -- those buzzing horns that have been everywhere at the World Cup soccer confab in South Africa (and, by proxy, the Internet) this summer.

"In order to put a bit of public pressure on them, we plan to buy 100 vuvuzelas and hire 100 vuvuzela players off Craigslist to play in front of BP's International Headquarters in London for an entire work day," Quirk wrote on the project's fundraising page on microfinance site Kickstarter.

"Ideally, the players will keep coming back every day until they fix the gusher."

Positioned at the top of the page is a grinning photo of BP CEO Tony Hayward with four vuvuzelas pointed at his face.

Quirk set a fundraising goal of $2,000 -- $1,000 to cover the cost of the vuvuzelas and to pay some people to help put the stunt together, with the rest of the money going to charity -- and still has until July 7 to raise more. (Kickstarter imposes deadlines on projects' campaign lengths.)

It took about two days to hit the goal, thanks to a writeup on industry blog Mashable and a choice spot on the front page of social news site Reddit.

Quirk told CNET via e-mail that anything above the cost of the vuvuzelas themselves and a few people hired to organize the whole thing will be donated to the Center for Biological Diversity's Gulf Disaster Fund, so he encourages people to keep on donating.

"Definitely not using any funds to fly there, probably won't fly there period," he wrote. "I'm recruiting volunteers in London to orchestrate." He says he's working on choosing a day for the event to occur.

The New York-based Kickstarter has been on the rise for a while, but resulted in the most press when a quartet of young developers used it to raise around $200,000 for Diaspora, an open-source social-networking project, at a point when industry leader Facebook was facing high-profile criticism over its privacy policies.

Quirk's campaign may indeed prove to be both a high-profile rallying cry (er, buzz) and notable fundraising effort for the Gulf oil spill cleanup efforts, but the viral success of this wacky project also hints at something a little less serious: Campaigns to save beloved TV shows from getting canceled are invariably about to get way more elaborate than 20 tons of peanuts.