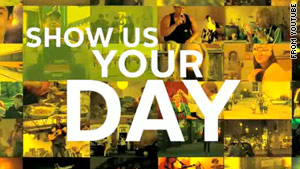 Late on Tuesday, the search giant posted an entry to the Official Google Blog announcing the creation of "Life In A Day," a film project that solicits video submissions from YouTube users around the world -- the criteria is that they must capture some kind of moment filmed on July 24.

It's legit. "Touching The Void" director Kevin Macdonald will edit "the most compelling footage" into a documentary film executive-produced by Ridley Scott of "Blade Runner" and "Gladiator" fame.

It will be shown at the 2011 Sundance Film Festival, all contributors who make it into the final cut will be credited as "co-directors," and 20 of them will be invited to the premiere.

But, the Google blog post explains, everyone's important! "Regardless of whether your footage makes it into the final film, your video(s) will live on on the 'Life in a Day' channel as a time capsule that will tell future generations what it was like to be alive on July 24, 2010," the post by product marketing manager Tim Partridge read.

If this sounds familiar, it's because the "crowdsourced 24-hour project" is old hat. The Yahoo-owned photo sharing site Flickr amassed user submissions from around the world on May 5, 2007 and eventually put selections into a self-published book.

This spring, The New York Times' photo blog, The Lens, organized a similar project and published the results in a visually stunning infographic -- titling it in Times-appropriate fashion, "A Timely Global Mosaic, Created By All Of Us." To Google's (and Ridley Scott's) credit, this time it's actually on film as opposed to in the form of a gigantic photo collection.

It's also part of Google's ongoing appeal to the independent and amateur filmmaking community. Last year, the company used the Sundance Film Festival as the kickoff event for its fledgling movie rental service, and continues to court industry professionals who may otherwise have been under the impression that YouTube is best for grainy videos of cats chasing laser pointers.