Angry 'Winnebago Man' a hit on web, in film 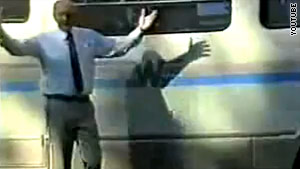 Jack Rebney, the Winnebago Man, has become a viral sensation for his profane outtakes from a 1988 sales video.
STORY HIGHLIGHTS
RELATED TOPICS

(CNN) -- It's hard to remember, but viral videos actually existed before YouTube.

Cult films such as Reefer Madness were literally passed hand-to-hand between fans. A link takes two seconds to e-mail, but taking the effort to physically pass along a VHS or 16 mm reel meant that the video was really amazing.

Now a new documentary film, "Winnebago Man," is recognizing one of these pre-YouTube phenomenons.

Jack Rebney, a.k.a. Winnebago Man, recorded a sales video for the popular RVs in August 1988. The Iowa-based video shoot was plagued with scorching summer heat, aggressive bugs and an extremely short-tempered and profane Rebney.

The sales video was completed, but not without four minutes of extra footage of Rebney flubbing his lines, cursing the mosquitoes, questioning his purpose in life and literally kicking the tires of the Winnebago -- all while dropping four-letter words into nearly every utterance.

The original VHS tape was dubbed and passed along -- first among Winnebago dealers and then between videotape collectors, who made it a 1990s underground phenomenon. Rebney became affectionately known as "The Angriest Man in the World."

Then came the Internet. Someone uploaded the short Winnebago clip (warning: not safe for work) to YouTube four years ago and it again became a viral touchstone. Both Rebney's manic anger and hilarious frustration still come across two decades later -- enough to bring more than 2 million views to the clip. Tastemaker Conan O'Brien recently called it one of his top five YouTube videos of all time.

This month brings the theatrical release of the Winnebago Man documentary, which features director Ben Steinbauer tracking down the reclusive Rebney at his cabin in northern California to interview the angry pitchman.

Steinbauer is touring the country with the movie, with screenings lined up in more than 40 cities between now and November.

According to The New York Times, Rebney didn't even know he was an internet celebrity until Steinbauer told him -- an odd twist for a man who became sort of famous twice.

The story behind the Winnebago Man harkens back to a time when viral celebrity wasn't as calculated an effort as it is today. Without Twitter, Facebook and YouTube, it was also a lot harder to earn.