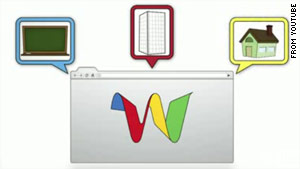 Google Wave aimed to combine many forms of online communication. But the public found it confusing.
STORY HIGHLIGHTS
RELATED TOPICS

(CNN) -- Google is pulling the plug on Google Wave.

Google intended the messaging program, launched in 2009, to be a near-replacement for e-mail, which it said had grown tired.

But on Wednesday, the company announced that it is shuttering the project by the end of the year because it didn't have traction with consumers.

"Wave has not seen the user adoption we would have liked," Urs Hölzle, a Google senior vice president, writes on the company's official blog.

"We don't plan to continue developing Wave as a standalone product, but we will maintain the site at least through the end of the year and extend the technology for use in other Google projects."

The post does not say how many people signed up for or used Google Wave.

The code for some of Wave's innovative features -- like instant messages that were sent letter-by-letter as a person typed -- has been made available to the public and could be incorporated into future projects, Google says.

The service aimed to combine all elements of online communication -- instant messages, e-mail, Twitter feeds, etc. -- into a single "wave."

But from the start, Google says, engineers at the company were unsure how the product would be perceived by real Internet users.

"We were equally jazzed about Google Wave internally, even though we weren't quite sure how users would respond to this radically different kind of communication," the company's blog says.

Many people who tried Wave found the service to be complicated and confusing.

Google Wave was created by two Danish brothers, Jens and Lars Rasmussen, who also were the brains behind the more-successful Google Maps.

In interviews with CNN in 2009, the brothers said their goal with Wave was not only to create an outstanding product that would change the nature of online communication but to prove that innovation is still possible at a massive corporation like Google.

Their aim was to make Google Wave completely new -- and therefore risky.

"I do believe that you can achieve more if you're willing to take risks," Lars Rasmussen said at the time.

Wednesday's blog post from Google acknowledges their hard work and lauds them for making advancements in computer science.

"Wave has taught us a lot, and we are proud of the team for the ways in which they have pushed the boundaries of computer science," the post says.

"We are excited about what they will develop next as we continue to create innovations with the potential to advance technology and the wider Web."

Maybe next time, more people will use it.