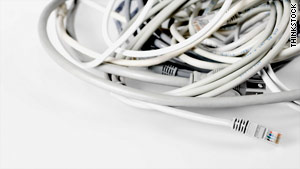 (CNET) -- As I read the criticism of Google and Verizon's supposed evil plan to demolish the Internet, and as I hear about "protests" of several dozen people at Google's headquarters, I scratch my head and wonder: am I missing something?

The Google-Verizon Net neutrality proposal I read last week doesn't sound nearly as apocalyptic as Free Press, a media advocacy group, and some of the most vocal critics out there have made it sound.

In fact, most of proposal sounded a lot like a plan FCC Chairman Julius Genachowski offered nearly a year ago, which many Net neutrality proponents seemed to support.

This is pretty much what Genachowski has proposed.

OK, terrific. There is agreement.

First, they claim that a provision in the Google-Verizon proposal that allows for broadband companies to offer managed services "would transform the free and open Internet into a closed platform like cable television," according to Joel Kelsey, political adviser for Free Press.

Others argue this aspect of the proposal would leave a ghettoized version of the public Internet.

"It is conceivable under the agreement that a network provider could devote 90 percent of its broadband capacity to these priority services and 10 percent to the best efforts Internet," said Gigi Sohn, president of Public Knowledge, a Washington, D.C.-based public interest group. "If managed services are allowed to cannibalize the best efforts Internet, whatever protections are agreed to for the latter become, for all intents and purposes, meaningless."

Yikes. Each of these scenarios sounds bad. I hate my cable TV service. It costs a lot of money for hundreds of channels of programming I don't watch. And how awful would it be if my Internet connection slowed to a crawl? I definitely don't want the Internet to turn into that.

Guess what? No one wants that to happen -- not even evil broadband providers. Why? It's bad business.

What Free Press and Public Knowledge don't seem to realize is that AT&T and Verizon already offer differentiated services today with enhanced quality of service to business customers.

Verizon's Fios TV and AT&T's U-verse TV services are also examples of managed Internet services that are delivered to consumers. And the last time I checked, no one, other than their cable competitors, has complained about AT&T and Verizon offering competition in the TV market.

The truth is that if Verizon and AT&T wanted to cannibalize their broadband business with premium broadband services, they'd already be doing it. But they aren't, because there hasn't been a market for it.

The reality is that consumers are in control of what type of services are offered. If the public Internet can adequately deliver a service for free, then there's no need to pay for it.

But if someone can provide a better service over a dedicated network and there are consumers willing to pay for it, then why shouldn't it be offered? Isn't that why some people subscribe to a 768Kbps broadband service for $15 a month, and others pay $100 for a 50Mbps service?

What's more, even though Verizon is now selling TV service, it hasn't blocked its broadband subscribers from accessing other video services, such as YouTube. In fact, it's even added a YouTube widget to its FiosTV service so subscribers can access YouTube videos on their TVs.

The truth is that Verizon wants customers to buy its managed Internet TV service and its broadband service. If it doesn't dedicate enough resources to offering a satisfactory broadband experience, customers will go to a competitor.

In short, Verizon would be cutting off its nose to spite its face if it skimped on broadband capacity to feed its managed service business.

The other major beef that Net neutrality supporters have with the Google-Verizon proposal is the fact that it leaves out wireless service.

"They are promising Net Neutrality only for a certain part of the Internet, one that they'll likely stop investing in," argues the SavetheInternet.com Coalition, a group that consists of several advocacy groups including MoveOn.Org Civic Action, Credo Action, the Progressive Change Campaign Committee, ColorofChange.org, and Free Press.

Ouch, I'm not sure I agree that broadband providers don't plan to invest in their wired networks. Verizon did just spend nearly $23 billion on its Fios deployment. But leaving wireless out of the Net neutrality rules also rubs me the wrong way.

"Wireless networks simply cannot provide the same amount of capacity as wireline networks (i.e., DSL and cable)," Joan Marsh, a vice president for Federal Regulatory affairs at AT&T, wrote in a blog post on Friday. "Fiber is to a wireline network what spectrum is to a wireless network, and as a transmission medium, the two simply do not compare. The theoretical top speed of a LTE carrier is 100 Mbps. By contrast, theoretical transmission speeds on fiber can reach as high as 25,000,000 Mbps. The 5 extra zeros tell the story."

I agree with the wireless industry that mobile networks are limited in terms of capacity. But what I don't understand is why rules, which would allow for these networks to be reasonably managed, can't also apply to wireless.

It seems to me that developers could develop around these network constraints, and then wireless operators would not have to be the gatekeepers determining which applications are acceptable and which are not.

For example, Sling Media developed a mobile app for the iPhone, which initially was rejected by AT&T because the operator said it consumed too much network capacity. But Sling's application, which was similar to other streaming TV apps already found in the iPhone App Store, actually worked around network constraints and when it sensed a congested network reduced its bandwidth consumption.

I agree that wireless carriers have a problem. Usage is growing faster than network capacity. But the solution should not be to block applications. Rather, it should be to increase capacity, manage the networks, and develop more efficient applications.

Google has long been a proponent of open wireless networks. In fact, it was instrumental in forcing the FCC to include a provision in the 700MHz auction that will require Verizon Wireless to create an "open" network using this spectrum.

So it was somewhat surprising that Google agreed to exclude wireless from the Net neutrality rules. But even Google recognized it had to compromise.

"It's true that Google previously has advocated for certain openness safeguards to be applied in a similar fashion to what would be applied to wireline services," Richard Whitt, Google's telecommunications and media counsel in Washington, D.C., wrote in a blog defending Google's position.

"However, in the spirit of compromise, we have agreed to a proposal that allows this market to remain free from regulation for now, while Congress keeps a watchful eye."

So if Google is willing to give up on Net neutrality rules for networks that are already more closed than traditional broadband networks, do we actually need Net neutrality regulation at all?

The phone companies would answer no to this question. So why is Verizon going along with the proposed Net neutrality rules on the wired side?

The company recognizes the political reality of the situation. Executives at Verizon realize that some measures must be taken. So it's easy for them to agree to rules that prohibit activities they aren't engaging in, such as blocking traffic on their broadband services. But it's much more difficult to agree to rules that would force them to completely open their wireless networks, something they aren't quite ready for.

At the end of the day, the Google-Verizon proposal is just that: a proposal. It is not legislation, nor is it regulation. And it would surprise me if every aspect of this document becomes the official law of the land.

So for all those people protesting in Mountain View, take a deep breath. There's still a long way to go.