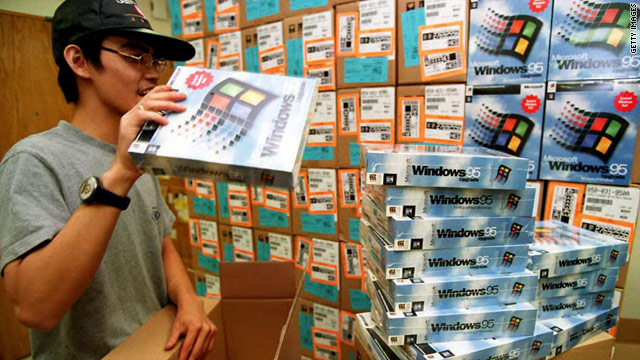 (CNET) -- The company paid to treat people to free newspapers in London, lighted the Empire State Building in Windows' colors and draped Toronto's CN Tower with a 300-foot banner -- all part of a massive $300 million ad campaign that accompanied the product's arrival.

Windows 95, which was separate from the company's business-oriented Windows NT product, added a number of features over its predecessors including better network support, the ability to send faxes (yes, there was a time when that was a big deal) along with basic audio recording, audio playback, and video playback tools.

Features now thought of as core parts of Windows, such as the start menu and taskbar, also made their debut with Windows 95. Plus, it just looked a whole lot better graphically and was far more stable than past consumer versions of Windows.

Internet Explorer debuted around the same time, but was sold separately as part of Microsoft's Plus Pack for Windows 95. It was eventually bundled in directly with the operating system in an update to Windows 95 released the following year.

By the time Windows 95 was finally ushered off the market in 2001, it had become a fixture on computer desktops around the world.

"If you look at Windows 95, it was a quantum leap in difference in technological capability and stability," Gartner analyst Neil MacDonald said at that time.

A decade and a half after Windows 95 hit the market, though, one question looms large for Windows: Are all its best days in the past?

Clearly it was a different time and Microsoft might be hard pressed to capture that kind of consumer attention no matter what it did. But, never mind the long lines, will Microsoft be able to continue to sell Windows at the price and volume it has?

It's one of the most important questions facing Microsoft as a company. While the company has expanded far beyond its Windows roots, Windows and Office remain the engine driving the vast majority of the company's profits even as it looks to cell phones, search, and online services to augment its mainstay businesses.

At the moment, the Windows business is doing quite well, with Windows 7 selling at an impressive clip. Indeed Windows 7 is selling far faster than Windows 95 did in its early days, though that's as much a testament to how large the PC market is as anything else.

The longer-term question is whether Windows can outpace what I call the generic web experience. In the coming years, smartbooks, tablets, cell phones, Netbooks and shapes we probably haven't thought of will all be capable of delivering the web, which is for many people their main use of a PC.

For Windows to be as relevant on Windows 95's 20th anniversary as it is today, the company will have had to manage to evolve the operating system significantly.

I see a few ways this can happen, but none is a sure thing.

First, Microsoft (or a third-party software maker) can develop a new killer app that only runs on Windows. It's been a long time since this happened, but certainly it's not impossible. New user interfaces can also be added. Touch is already there, as is voice control to some degree, but gesture recognition such as that found in Kinect could pave the way for new uses.

Second, it could evolve Windows and Windows Live to offer a dramatically better way of doing the same tasks that most people do on the Web. Sure, we can manage our photos and music on the Web today and that is getting easier. However, tapping local storage and graphics, Microsoft has the potential to offer a better way and, with the latest version of Windows Live, is trying to do so.

Third, Microsoft could enhance the value of Windows by having a browser that is demonstrably superior to non-Windows rivals. This appears to be a tall order, given that Internet Explorer, while still leading in market share, has been well behind rivals when it comes to being seen as the technical leader.

For the record, this challenge is not just the one facing Microsoft. It's also the one facing Apple's Mac business. And while Microsoft must justify the $100 or so premium that it charges for Windows, Apple commands an even higher premium when comparing the Mac to one of these "generic Web" devices.

But Apple also has another entrant in the game -- a viable alternative Web experience delivered in the form of the iPad. Microsoft, at least so far, appears to have only Windows, in its various flavors.