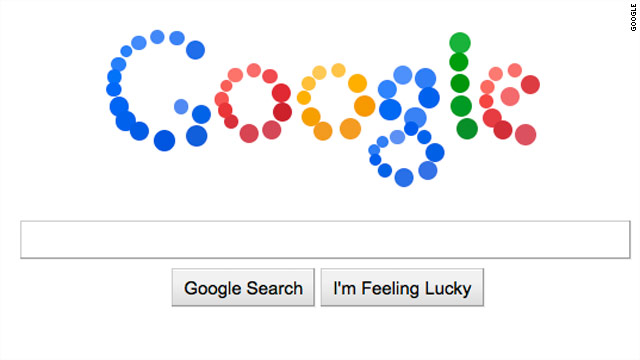 Google's logo turned into a bunch of floating dots Tuesday when the user scrolled over it.
STORY HIGHLIGHTS
RELATED TOPICS

(CNN) -- Users of Google's search page were greeted Tuesday with a screen of colorful, interactive dots, even though the company didn't immediately explain why.

On the U.S. version of the main search page, Google's logo was composed of a bunch of multicolored dots, or balls. When you moved your cursor toward the logo, the dots would change size and scatter. Once the cursor was still, the dots stopped swirling and regrouped.

It was unclear Tuesday morning exactly what, if anything, the animated doodle represents.

"Today's doodle is fast, fun and interactive, just the way we think search should be," spokesman Nate Tyler said in an e-mail.

The search giant is famous for tweaking its logo to denote holidays and other special occasions. Employees from all over the company suggest doodles, then a dedicated team of artists brings them to life.

Take a look at some of Google's best doodles.

More recently, Google has supplemented its static doodles with animated designs. Its most heralded interactive creation may have come in May when, to honor the 30th anniversary of Pac-Man, the doodle was transformed into a playable version of the arcade classic.

Many Google users paused their searches that day to play the game, leading analysts to estimate the logo caused millions of lost hours of worker productivity.

By Tuesday afternoon, speculation about the interactive image centered around an event Google had scheduled for Wednesday.

Details were scant, but the event at San Francisco, California's Museum of Modern Art seems to clearly be focused on search and designed "to share our latest technological innovation," according to the invitation.

Another theory Tuesday was that the swirling dots are intended to celebrate the company's anniversary. Google was founded in September 1998. It filed for incorporation on September 4, but the first check written to "Google Inc." came on September 7.

Some Google users grumbled they could not see the animated-dot logo, which did not appear in all Web browsers.

But online reaction to the animated logo was mostly positive.

"Uhm ... am I the only one playing with the Google logo today like a giddy little toddler?" wrote a Twitter user named nineone.

It was also apparently working for comedian and late-night host Jimmy Fallon.

Another user, MojoRojo, reacted to the new logo by tweeting, "One day Google is going to take over the world. And we won't even know because we'll be too busy playing with their logo to notice."