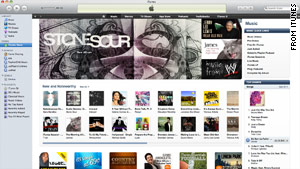 It's likely that the number of apps downloaded will surpass that of songs by the end of the year, according to Asymco.
STORY HIGHLIGHTS
RELATED TOPICS

(CNN) -- We'll soon have downloaded more apps than songs from iTunes, according to app developer Asymco.

Asymco's research states that "the App Store has reached the same total downloads" -- more than 6 billion -- "in 2.2 years as the iTMS [iTunes Music Store] reached after five years." And it's likely that the number of apps will surpass that of songs by the end of the year.

But Mark Beccue, a senior analyst at market intelligence company ABI Research, said he isn't surprised the App Store has caught up so quickly.

"The [music] industry has been troubled for a long time because of pirating and file sharing and all those things," Beccue said. "There should be a lot more downloads than you would think ... but a lot of people are getting things for free."

However, that's not how it works with apps, he said.

"Apps you can't pirate easily at all," he said. "Some studies have shown that a lot of people ... don't use [an app] past a week or two. What helps keep apps alive is how useful they are."

Price is another factor that affects the numbers of apps downloaded versus the number of songs, Beccue said. Many apps are free to download whereas songs typically cost 99 cents.