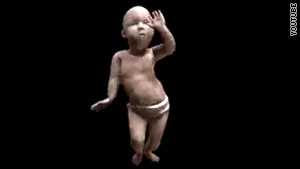 Editor's note: Damon Brown is a Northern California-based freelance writer and author of books, including "Damon Brown's Simple Guide to the iPad" and the forthcoming "The Complete Idiot's Guide To Memes," about why certain things go viral online.

(CNN) -- Back when the internet was young -- we're talking way before YouTube viral videos, Twitter memes and catchy Facebook statuses -- people were entertained by much simpler pleasures.

The most memorable viral statements of the late 1990s and early 2000s? Animated GIFs (short for Graphics Interchange Format) -- those crude little animated clips that popped up on websites or got forwarded around in e-mails.

Small enough to download quickly on your 56K modem and even e-mail as an attachment, kinetic icons such as Peanut Butter Jelly Time and Dancing Baby, the 3-D toddler who danced his way across the Web and into Ally McBeal's hallucinations, were once the most popular memes on the net.

More a visual homage to GIFs than a history lesson, "Cache Rules Everything Around Me" features everything from classic cat animations to home-video pratfalls to the George W. Bush shoe-throwing attack.

The new video is set to Girl Talk's "Night Ripper," which itself is a mash-up of popular songs from the past couple of decades.

If that's not enough, Complex Magazine offers a hilarious history of the 50 Greatest Animated GIFs of All Time.