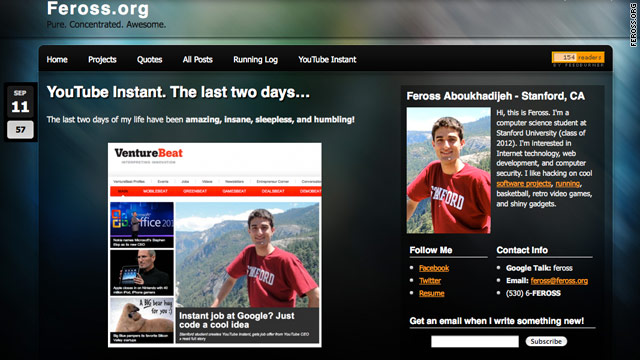 (CNET) -- For Stanford University student Feross Aboukhadijeh, what started off as a bet fueled by youthful ambition and technical bravado, ended up an Internet hit and quite possibly a job.

Last week, Aboukhadijeh, 19, was just an ordinary, albeit talented, college student as he tested out Google Instant, the Web giant's new predictive search results feature. He was immediately impressed on its debut Wednesday but also inspired. To his roommate, he said, "I bet you I can build YouTube Instant in an hour." And his roommate took him up on the bet.

He spent a couple more hours Thursday sprucing up the user interface. And before going to sleep that night, he posted his work to his Facebook page.

"When I woke up Friday morning there was craziness," he said.

By "craziness," Aboukhadijeh means countless e-mails congratulating him, a bevy of interview requests, a server flooded with Web traffic, the creation of a Wikipedia entry in his name, and -- perhaps most notably -- a job offer from YouTube CEO Chad Hurley via Twitter.

Unsure just how seriously to take the tweeted job offer, Aboukhadijeh replied along the lines of "Is this a for-real offer?" Hurley then e-mailed him to set up a meeting, which is scheduled for Monday at YouTube's San Bruno, Calif., headquarters, Aboukhadijeh said.

YouTube officials didn't respond to an e-mail request sent Friday from CNET seeking confirmation of the job offer or meeting.

Aboukhadijeh is just finishing up a summer internship with Facebook, but he doesn't see how that would prohibit his taking a job at YouTube, which is owned by Google.

"I'd like to finish college," he added, which he agreed could pose the bigger problem.

Much like Google Instant, YouTube Instant lets people type in what they're looking for, and the engine guesses what that video is. By design, it plays the video immediately. However, based on feedback, Aboukhadijeh said he's working on play and pause features, among other improvements.

"It's not as useful as Google Instant if you know exactly what you're looking for, since you're shown distracting YouTube videos on the way to your destination," Aboukhadijeh told All Thing Digital's Peter Kafka. "But I think this is perfect for many Internet users."

Aboukhadijeh, who is from Sacramento, California, said he's been blown away by how quickly his tool went viral and is grateful for all the supportive feedback.

"I'm amazed and humbled by all the attention it's received. So thank you," he said.

But imitation is the highest form of flattery, and it appears he's got that, too. TechCrunch on Saturday pointed to Alabama-based developer Michael Hart, who, inspired by Aboukhadijeh, used jQuery and the Google Maps API to build Google Maps Instant. And the same blogger later pointed to an all-encompassing Instantise page that gives a home to the evidently quickly growing number of sites with instant, predictive search results.

Aboukhadijeh is a majoring in computer science, but his technical expertise has been developing over many years.

Around age 5, when his parents bought a new microwave oven, he took the manual and learned how to turn on the child lock, something his parents never learned to do. That knowledge came in handy when he was old enough to get grounded -- he would lock it up and use it as a bargaining chip.