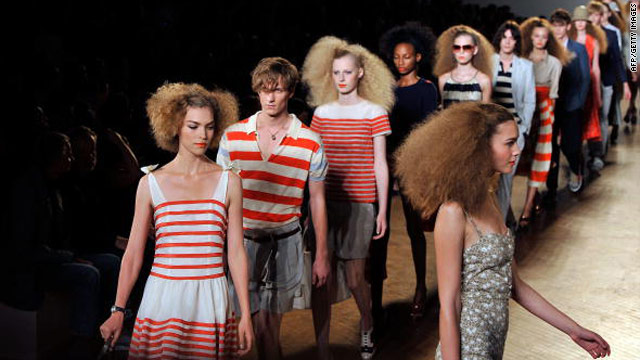 (CNN) -- The Devil might wear Prada, but until recently he would have had a devil of a time buying it direct from the fashion company's website.

Prada, like many leading purveyors of designer clothing and luxury goods, until two months ago had avoided selling its products direct via the Internet. Even now it just sells accessories, not clothes.

Prior to the re-launch of the Marc Jacobs website, the company's online presence was used only to sell the brand's exclusivity, with images of glitzy gear but no electronic shopping basket in which to bundle it.

They have had to accept that they can't rely on the same tiny slice of customers that they used to
--Kerry Potter, Elle magazine
RELATED TOPICS

Other labels, such as shoe designer Jimmy Choo and German fashion house Hugo Boss, are selling direct online, but it's a recent trend.

"Whether or not to sell online -- it's been a big debate for many years now," luxury goods analyst Marshall Cooper, CEO of LuxuryBrandNetwork.com told CNN.

"Luxury brands obtain premium prices by creating an aura around their products. On the web, it's much harder to create this aura."

Kerry Potter, contributing editor to glossy monthly fashion magazine Elle, says there has been suspicion of the internet among many established fashion houses largely due to a fear of image erosion.

"They've all been very slow to get with the program," she said, adding that a number of issues were now forcing many to change their opinion of the web.

Not least is the stellar success of independent retailers such as Net-a-porter.com, a website that learned from the mistakes of earlier failed online designer retail ventures to corner a huge slice of the market.

Net-a-porter, which offers clothing and accessories from more than 300 big name luxury brands, was launched in a backroom in London by former magazine editor Natalie Massenet in 2000.

Massenet says she spotted a gap in the market in which fashion magazines were telling consumers what -- but not where -- to buy.

"So by creating a site that does both, we think the place where the time-starved consumer gets her fashion news will also be the place where she chooses to shop," she told Fortune magazine.

Business boomed. In the year to January 2010, the site pulled in a reported $187 million. Three months later, Massenet sold her stake to Swiss luxury goods group Richemont for an estimated $78 million.

With the global economic downturn snapping at the hemlines of even the most exclusive designers, such online revenue figures have been a wake- up call.

"It's a lost opportunity more than anything," says LuxuryBrandNetwork's Cooper. "The web has become such a force in people's lives -- especially for people under 40, there is now a recognition that it cannot be ignored."

According to Potter, the shift towards online retailing is a recognition by the once dictatorial fashion industry that it is facing a "democratization," partly driven by the Internet.

She said moves by designers such as Burberry to broadcast catwalk shows on their websites, thus granting access to even the most casual fashionistas, was a tacit acknowledgement of this.

"They have had to accept that they can't rely on the same tiny slice of customers that they used to."

Added Potter, another factor is the global spread of demand, often to places where there is no access to boutiques catering to the style- conscious wealthy.

But she says, not all the impetus for change is external. Louis Vuitton -- one of the most world's most counterfeited fashion labels -- is putting the squeeze on fakes by e-selling direct, while at other labels, younger web-savvy designers are actively pushing moves online.

So must designer labels resign themselves to losing their mystique by retailing online? Not necessarily, according to Cooper.

"I think they can protect their brand if their web presence complements their offline strategy."

Whether they can or not, it seems with Marc Jacobs now resolutely on board, e-commerce is now as inescapable a trend for the fashion industry as aviator jackets this season.

Said Potter: "What Marc Jacobs does, everyone follows."