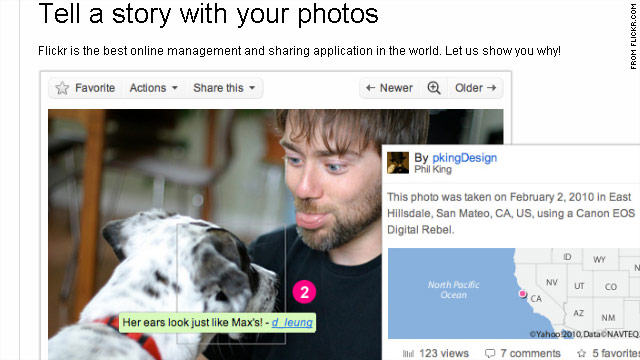 The photo-sharing site, which has been somewhat eclipsed by Facebook in recent years, announced on Sunday that a user had uploaded the site's 5 billionth photo -- a shot of an iconic building in Vancouver, British Columbia.

"I am Mr. 5 Billion, and there ain't nothing you can do to stop me," Aaron Yeo, the 20-year-old photographer who uploaded the photo, wrote in its caption.

Facebook, by comparison, says half that number -- 2.5 billion photos -- are uploaded to its social network each month.

Facebook claims to be the largest photo-sharing site on the internet, and more than 15 billion photos had been uploaded to the site as of April 2009, according to Facebook's blog.

Despite the fact that Flickr isn't the internet's largest photo site, there are signs that the site, which is owned by Yahoo, isn't going away any time soon.

The site's uploads have been increasing steadily since late 2007, writes the blog Media Culpa, which first reported the news about Flickr's 5 billionth photo. Flickr, the blog says, has been growing by a billion photos a year for three years.

Flickr differs from Facebook in that users store photos of any size, and can upload as many photos as they want with a "pro" subscription.

The site is known for attracting some top-notch photographers, and for making many of its photos available for public use by grouping them in interesting ways.

The site says it aims to make photo organization a group effort.

"In Flickr, you can give your friends, family, and other contacts permission to organize your stuff -- not just to add comments, but also notes and tags," the site says on its "about" page. "People like to ooh and ahh, laugh and cry, make wisecracks when sharing photos and videos. Why not give them the ability to do this when they look at them over the internet?"

As the blog Social Photo Talk notes, Facebook has many uses and purposes, while Flickr is focused solely on uploading and organizing photos.

"Flickr is more of a single-purpose social network than Facebook, but that single purpose is photo sharing, and it does it very well," the blog says.

As for the 5 billionth photo, it is actually a digital compilation of eight exposures, he said. Yeo merged those shots into one image to show how the Vancouver building's sign spins over time.