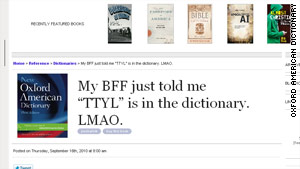 Oxford announced its new dictionary additions with some webspeak of its own.
STORY HIGHLIGHTS
RELATED TOPICS

The venerable Oxford American Dictionary has added a ginormous (adj., not included) list of words inspired by the interweb (noun, included).

The next time you look up a word, expect to see lots of abbreviations, webspeak and casual slang.

• Interweb: A funny term for the internet

• LMAO: Laughing my ass off

• TTYL: Talk to you later

The New Oxford American Dictionary has added cultural slang in the past, but never as aggressively as it has in the latest edition.

Citing slumping sales, the 126-year-old book recently said it was considering going all digital for its next full update, the Oxford English Dictionary, Volume 3.

It is nice to see Oxford attempting to get with the times. But how much of a blowback will schools receive when students can defend Twitter language -- not to mention slang like "lipstick lesbian," "tramp stamp" and "bromance" -- in their essays?

You can almost hear your eighth-grade English teacher having a heart attack -- or even briefly pondering one potential addition that Oxford neglected: