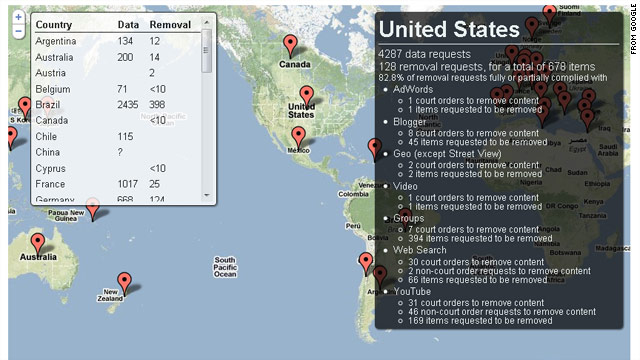 (CNN) -- Think internet censorship only happens in China and Iran?

The search company this week released a new online tool to highlight specific instances of government censorship of the internet in countries from Germany to Turkey and Australia to Thailand.

Called Google Transparency, the online report shows that internet censorship around the world is increasing over time, and not always in the countries you'd expect, said Dorothy Chou, a Google policy analyst who worked on the project.

"The threat to internet freedom has actually been growing over the past few years," she said, noting that the United States generally bucks that trend by supporting open online communication.

Google Transparency includes an interactive map where users can see how many requests countries have made for Google to block or remove content.

The online tool also lets users explore internet up-time in specific countries for specific Google-owned websites. Using the tool, for example, people can see that Iran blocked YouTube after a disputed election in 2009 and hasn't let its internet users see that video website since. After "Everybody Draw Mohammed Day" -- an online protest in support of free speech -- earlier this year, Pakistan similarly blocked YouTube for 10 days, the data show.

Countries that would be thought less likely to filter the internet also try, Chou said.

Thailand, for example, asked Google to remove YouTube videos that showed the Thai king, Bhumibol Adulyadej, with feet near his head. A national law bans such offensive representations, Chou said, and Google agreed not to show such videos within Thailand, although they are still available elsewhere in the world.

Germany bans neo-Nazi content, and Google has agreed to remove such sites from its Google.de search engine in that country, Chou said. Turkey, meanwhile, blocks YouTube, she said, because the company refused to take down all potentially offensive videos about Ataturk, the Turkish political hero.

Google said it hopes Transparency will shed light on how the internet differs from country to country, and on the efforts of nations to block internet content.

"What we're trying to do is give a picture of what's accessible around the world -- are our services accessible?" she said. "What we believe is more information is better for users." The data only applies to sites that Google owns, which include Blogger, YouTube, AdWords, Google Maps and others.

Google's tool is the first of its kind published by a private-sector group, Chou said. The site Herdict.org, a project of a group at Harvard University, aims to crowd source similar information by asking users around the world to post when specific internet services go down. Herdict -- a combination of the words "herd" and "verdict" -- maps the user-submitted data on its website.

A group called the OpenNet Initiative also has published a world map showing to what degrees countries censor social and political speech online.

Herdict's blog praises Google for posting global information about internet censorship, but it said the project is difficult to navigate.

With regards to China, Stefan Kulk, an internet lawyer, wrote on the Herdict blog that Google's new tool is more confusing than the one it replaces, which showed internet users which Google services were up or down in that country using a simple chart and plain language. "From the China availability chart we know that Google Docs is 'partially blocked.' This is however hard to see from the data in Google's new traffic tool," Kulk wrote.

Chou, from Google, said it is difficult to compare one country to another using Google Transparency. Data about how many times countries have asked Google to remove content, as well as how many times they have requested information about Google users, is not uniform. It also does not include China, she said, because providing such information is illegal under Chinese law. Publishing it also could endanger Google employees in China, she said.

Data about whether Google services are blocked in China is available on the new Google service, but it is published as a graph instead of as a list.

The Google data also do not indicate whether Google did or did not comply with specific censorship requests for the various countries. The tool instead lists the percentage of requests that Google complied with.

Between January and June of this year, the United States asked Google for information about its users 4,287 times and filed 128 requests asking Google to remove information from its websites, according to the data.

Google said it complied with nearly 83 percent of U.S. requests that it remove information from its search engine or other sites.

Chou said Google complies with the laws of the countries in which it operates, and declined to list a specific example of a censorship request in the United States. She said, however, that a request might be for Google to remove content from a blog that violates U.S. copyright law.

Google also sends information about online content it is asked to remove to a website called ChillingEffects.org, she said.

Because the data are not collected in the same way for all countries, and because Google is based in the United States, it is difficult to compare those numbers to the censorship requests of other countries, Chou said.

In general, she said, countries are making more efforts to block online content.

"The openness and freedom that have shaped the internet as a powerful tool has come under threats from governments who want to control that technology," she said, adding that the public will be able to see this shift with Google's new tool.