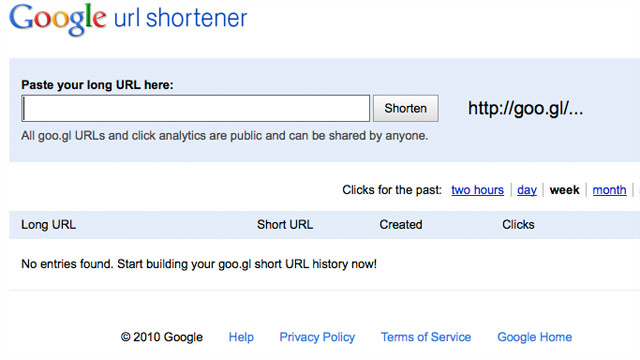 The biggest advantage Google may have over smaller abbreviators is the connection between dozens of its services.
STORY HIGHLIGHTS
RELATED TOPICS

(CNN) -- Web-page addresses can be notoriously long, but even the normal ones seem absolutely huge in our age of Twitter and text messaging. Every letter counts when you have only 140 characters.

Now Google hopes to revolutionize the Web address shortening arena with Goo.gl, now available to the public through its website at http://goo.gl.

Goo.gl was originally a proprietary way for Google to abbreviate its Web addresses within services such as Google News (for saving article links) or Google Maps (for sending a location).

The new Goo.gl website will abbreviate your links and store them for you to view later or share with others.

Google says it is also using special provisions to prevent blind links from leading to malware or dangerous websites.

But Google is entering a super-crowded arena. TinyURL has been abbreviating Web addresses for nearly a decade, and the advent of Twitter has encouraged more sophisticated abbreviators, like bit.ly, which allow people to organize and search through their saved links.

Individual media sites have also created their own abbreviations: http://nyti.ms for The New York Times, for example, and http://t.co for Twitter.

As ReadWriteWeb notes, the biggest advantage Google has over the smaller abbreviators is its massive size and the connection between dozens of its services. That may be enough to make it the top web shortener in short order.