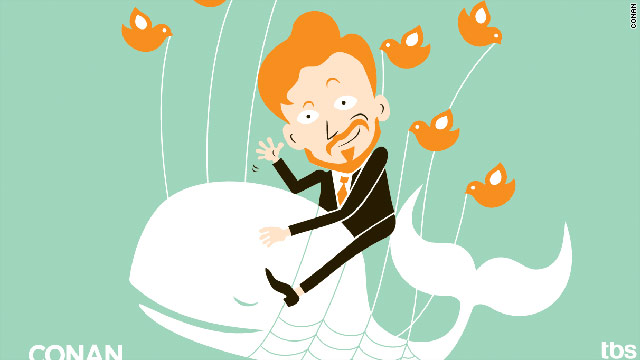 The Conan O'Brien "Pale Whale" image spoofs the iconic Twitter image that appears when the site is down.
STORY HIGHLIGHTS
RELATED TOPICS

(CNN) -- On Monday night television, Conan O'Brien rides again. But until then, the comedian is saddled up for a gallop on the "Fail Whale."

O'Brien has been immortalized by Yiying Lu, the artist who created the image Twitter users see when the micro-blogging site is down.

Called "The Pale Whale," the cartoon shows O'Brien astride the whale, which became an icon on Twitter when the site was struggling to keep up with traffic from its rapid growth.

The name riffs on O'Brien's frequent jokes about his pasty, Irish complexion.

The image is available to fans as desktop and mobile wallpaper on the Team Coco website, which is promoting the Monday debut of "Conan."

O'Brien walked away from his NBC "Late Night" show in January after it was pushed to a later time spot to accommodate Jay Leno's "Tonight Show," which had flailed in the ratings in an earlier slot.

In April, TBS, which is owned by the same parent company as CNN, announced O'Brien would be coming to the cable channel, which had already begun trying to establish a late-night talk presence with "Lopez Tonight."

His departure from NBC whipped up a big response on the Web. The name "Team Coco" came from a Twitter hashtag [#teamcoco], which people used on the site to express support for him.

He turned to the site himself between gigs, amassing more than 1.8 million followers with a steady stream of quips.

Monday, not surprisingly, was no different.

"I feel like I have something to do tonight that I keep forgetting,"O'Brien posted at about noon.