How to travel with a machete -- and other TSA app advice 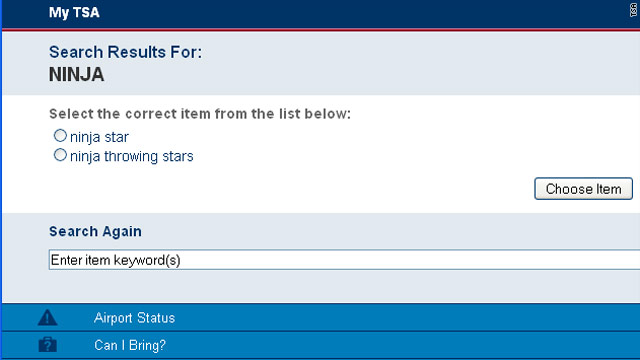 The TSA's "Can I Bring?" app tells users what can, and can't, be brought on a plane. Ninja stars, for the record, are a no-go.
STORY HIGHLIGHTS

(CNN) -- Worried about an up-close-and-personal body scan or a particularly touchy pat-down during holiday travel this week?

At least a mobile app from the TSA can ease your planning anxiety by clearing up whether you can bring your cricket bat or machete on the plane.

The Transportation Security Administration has released an app for the iPhone that lets travelers check security wait times at airports and get a rundown of ways to make the check-in process quicker.

All valid uses. But, on Monday, the app [also accessible on a page on the TSA website] was providing some presumably unintended entertainment via its "Can I Bring?" feature.

The tool lets users type in the name of an item to see whether they can bring it on a flight. Practical? Yes. Potential for random silliness? Also, yes.

Politico included the app in a list of TSA-related factoids Monday.

Expert: Pat downs 'seem to be a stretch'

Do airport body scanners even work?

Our in-depth research concluded: Machetes, toy swords, cricket bats and assault rifles, indeed, cannot be carried on a plane. They must be checked as baggage. Machetes, just so you know, should be "properly sheathed or securely wrapped to prevent injury to TSOs and baggage handlers," the app says.

Pizza, sporks and knitting needles, on the other hand, are allowed on the plane with you. Hats are fine. Hatchets, not so much.

Goldfish will have to be visually inspected by an agent, according to the app, which elaborates on this point with a "Special Instructions!" alert:

"Live fish must be transported in a clear, plastic, spill proof container. In this case, the container may be larger than 3.4 ounces. A Transportation Security Officer will visually inspect your live fish at the checkpoint," the app says.

We're also having fun figuring out what the TSA considered too ridiculous to list. "Samurai sword" didn't make the list. Neither did "live chicken" or "lobster."

By the way, "ninja throwing stars" are a no-go, according to the app -- a fact that may have saved Apple CEO Steve Jobs some trouble in Japan, at least according to disputed online tabloid reports.