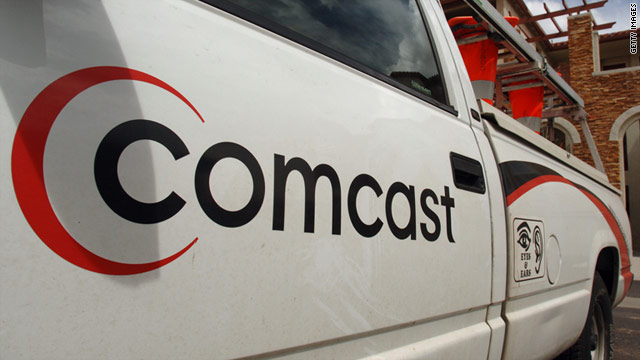 A fight between Comcast and a provider for Netflix is viewed by some as a net-neutrality showdown.
STORY HIGHLIGHTS
RELATED TOPICS

(CNN) -- A virtual slugfest over online movies between Comcast and a Netflix partner has movie fans and net-neutrality advocates up in arms.

Level 3, a company that streams Web content, signed a deal earlier this month to be the primary provider for Netflix, whose streams of movies and TV shows consume a lot of bandwidth on high-speed internet networks.

Critics fear this would lead to increased cost to the consumer in the form of higher fees from either Comcast, Netflix or both.

The spat has many online communities concerned, not just about increased cable and movie bills, but also what the dispute could mean for the future of a free interent.

According to Level 3, which runs one of several broadband networks that let people stream online video, Comcast has made a "take it or leave it" offer to pay more or get blocked.

"By taking this action, Comcast is effectively putting up a toll booth at the borders of its broadband internet access network, enabling it to unilaterally decide how much to charge for content which competes with its own cable TV and Xfinity delivered content," Level 3 said in a news release.

"This action by Comcast threatens the open internet and is a clear abuse of the dominant control that Comcast exerts in broadband access markets as the nation's largest cable provider."

In its own blog post, Comcast said Level 3 has "inaccurately portrayed" the negotiations.

The company said it has a "long established and mutually acceptable deal with Level 3 that is comparable to the deals with its competitors.

"But Level 3 is trying to gain an unfair business advantage over its [content-delivery] competitors by claiming it's entitled to be treated differently and trying to force Comcast to give Level 3 unlimited and highly imbalanced traffic and shift all the cost onto Comcast and its customers," wrote Joe Waz, a senior vice president for communications at Comcast.

The post said Level 3's proposal would send five times as much traffic to Comcast as Comcast sends to Level 3. Comcast said it has made a counteroffer and plans to meet with Level 3 later this week.

As part of the Netflix deal, Level 3 announced it was doubling its storage capacity, adding the ability to move 2.9 more terabits of data every second. At that rate, the contents of an entire academic research library could be moved in less than four seconds.

"This sets a scary precedent," wrote blogger Seth Weintraub for Fortune.com. "If Comcast can charge an extra fee to Level 3 for hosting Netflix content, it could (and probably will at some point) charge Google to stream YouTube movies or Apple to broadcast iTunes content. Because Comcast owns the last mile, they hold the keys."

On November 22, Neflix announced on its blog that the price of subscribers' unlimited plans would be increasing $1 per month to "continue to offer the popular plan choice of unlimited TV episodes and movies streaming instantly along with unlimited DVDs."

The liberal Progressive Change Campaign Committee, which backs net neutrality -- the principle that internet providers shouldn't favor one client over another -- started an online petition to the Federal Communications Commission on Tuesday.

The issue was a hot topic on Twitter as well.

A few voices, though, were defending the cable giant, calling the deal simple business.

"A download is a transaction between 2 parties," wrote user @Mr_Sterling. "Level3 consumes terabytes of Comcast's backbone at peak use hours, at no cost."