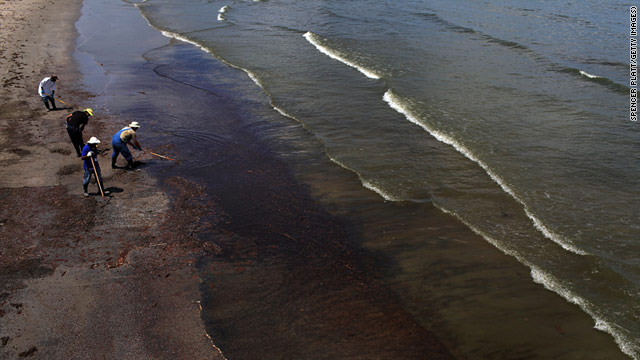 The Gulf of Mexico oil disaster was the most searched term on Yahoo in 2010. World Cup soccer was second.
STORY HIGHLIGHTS
RELATED TOPICS

(CNN) -- The oil disaster in the Gulf of Mexico was the most searched term on Yahoo in 2010, the search engine said Wednesday.

"People turned to the Web to watch the live feed of the oil leak, search for answers to the spill's impact, and get details," Yahoo said in announcing its annual look back at the top trends of the year.

The search engine compiles its Year in Review by looking at user search terms.

The fascination with this year's World Cup soccer tournament, the iPhone and the TV show "American Idol" also ranked among the most searched items.

Celebrities dominated the rest of the top 10 with pop singer Miley Cyrus, Lady Gaga and Justin Bieber among them.

The oil disaster began on April 20 when an explosion aboard an oil rig sent crude spewing from a BP-owned well deep below the Gulf of Mexico. More than 4.9 million barrels (206 million gallons) of crude spilled into the Gulf of Mexico before the well was finally sealed on September 19.

"In 2010 consumers watched the BP disaster unfold like a slow-motion horror film and discovered a love for the 'other' football," said Vera Chan, senior editor and Web trend analyst for Yahoo.

The World Cup soccer tournament -- the most watched sporting event in the world -- is held every four years.

"Search trends showed excitement around the players and teams throughout the World Cup tournament," Yahoo said in a statement. "Many consumers asked questions about the rules of soccer, and some even logged on to identify the annoying sounds coming through their televisions (think vuvuzela horns)."

1. The Gulf of Mexico oil disaster