Is the Google eBookstore any different? 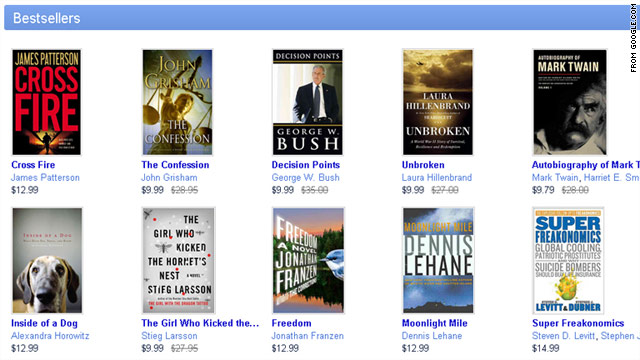 (CNN) -- Google on Monday launched what it says is the largest digital bookstore on the internet -- a site called the Google eBookstore.

"The idea behind Google eBooks is to truly set your reading free," the company says in a YouTube video about the new service.

Sounds nice. Free reading. But is Google's foray into digital books actually any different than efforts from Amazon and Barnes & Noble? Here's a quick guide:

More e-books, and millions are free

Google says its online bookstore is larger than any other, with more than 3 million titles in all. Some of these books are free, since they're out of copyright.

Here's a breakdown: 2.8 million of Google's e-books are free and out-of-copyright; and the Google eBookstore also sells "hundreds of thousands" of paid titles, including those from all six of the top publishers in the U.S., said Michael Kirkland, a Google spokesman.

Read on (almost) any device

Google is trying to position itself as the "open" bookstore, meaning the digital books it sells come in various formats and can be read on almost any device -- from the Apple iPad to the Sony Reader or an Android smartphone.

This puts it in stark contrast with Amazon, which sells its own e-books in a protected format that's only viewable on its Kindle e-reader, or with Kindle apps for other devices. It seems like Amazon's goal is to lock Kindle owners into a single bookstore: Amazon.com.

Google doesn't really favor certain devices, and the e-books it sells come in several formats -- including ePUB and PDF -- that work on multiple devices.

Here's a list of all the devices that work with Google's e-books. Note one gaping hole: the Amazon's Kindle, which is the most popular e-reader.

Google's e-books are stored in the cloud. That means they live on the internet, not on a particular device, so you could start reading a book on your smartphone at 8 a.m. and jump on a Barnes & Noble Nook at lunchtime -- picking up right where you left off without having to download the book again.

The Amazon Kindle and others make readers download books and store them on e-reader devices, which is a little less flexible, and means you can run out of room to store books on the gadget (the new Amazon Kindle can hold up to 3,500 books, Amazon says, so maybe that's not a problem unless you're an English professor at Harvard or something. The company also stores a back-up copy of its books in the cloud).

Maybe this seems like a minor thing, but page numbers in digital books can actually be a pretty big pain. Google's e-books are marked with page numbers that are the same as those in the paper version of the book.

On devices with small screens -- like smartphones -- the Google page number will be the same several times in a row, indicating to the reader that he or she is still on the same physical page of the book, even as the digital pages change. Other devices tend either not to assign page numbers at all, or to assign digital page numbers based on how the text is reformatted, meaning you'd be on a different page number on your laptop than you would be on your e-reader.

That might not go over well in your e-book club.

Obviously Google isn't opening an e-book store out of the goodness of its multi-billion-dollar heart. The company makes money when readers purchase books from its online store. How much money it will make is up for debate, since the company is being quiet about its deals with publishers.

Some publishers get a 70-30 revenue split, meaning Google keeps 30 percent of the sale and the publisher gets 70 percent, said Kirkland, the Google spokesman. That's pretty standard for the industry at this point.

But other may not fare as well with Google. Some publishers who operate without agency contracts can get as little as 52 percent of the purchase price, said Kirkland, who stressed that Google's deals with publishers are drawn up on an individual basis and can vary widely.

The blog TechCrunch says it's surprised Google takes such a big cut:

"For a company that makes billions off of high-volume, low-value transactions, the choice to take half of every sale is puzzling," writes Devin Coldewey. "I would have guessed that they'd play a ten-year game, betting on e-books becoming such a high-volume market that Google could afford to only take 25 percent or even less of every transaction, encouraging use of their service over the competition.

Others get to sell, too

Still, Google does something others don't: It lets small booksellers leverage its online presence to make sales of their own. So far, three partners -- Powell's Books, Alibris and the American Booksellers Association -- can sell books through the Google eBookstore. Google takes a cut of those sales, too, but splits revenue with the smaller bookseller, Kirkland said. He declined to give specifics on those deals and said the proportions vary by company.

Google is "definitely not coming out to try to undercut anybody" on e-book prices, Kirkland said. Instead of trying to price slightly below competitors, Google has developed a book pricing equation to determine the best prices, he said. Prices for several best sellers appeared to be about the same as those on competitor sites, like Amazon and Barnes & Noble.

Many new books at the Google eBookstore were selling for $10 to $15 on Monday afternoon.