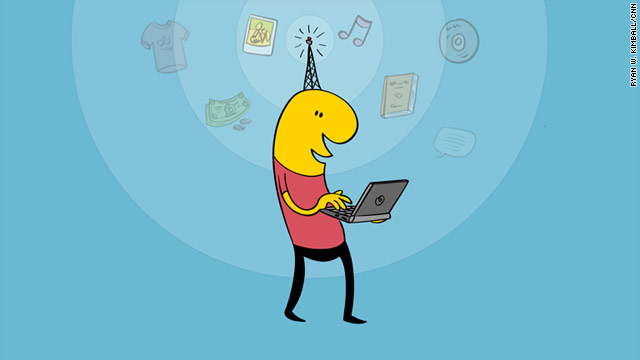 The internet has become a global record of our streams of consciousness. Is anything private?
STORY HIGHLIGHTS

Editor's Note: This is the first article in CNN's "End of Privacy" series. Join the conversation on Twitter by following @cnntech and #endofprivacy.

(CNN) -- An average internet user can dig up all kinds of details -- both juicy and mundane -- about the life of Louis Gray, a 33-year-old from Sunnyvale, California.

Among the personal nuggets a quick search reveals:

• Gray has three children: 2-and-a-half-year-old twins named Matthew and Sarah; and Braden, who is three months old and was born prematurely. The twins dressed up as Peter Pan and Tinker Bell, respectively, for Halloween this year -- and when they hear techno music, they jitter around like they're on nonexistent trampolines.

• Kristine Gray, Louis' history-loving, school-teaching wife, makes some interesting -- and potentially embarrassing -- purchases on their family credit card. Among them: $109.25 per month to rent a breast milk pump from El Camino Hospital Maternal Connections. The last time she made such a purchase was November 29.

• Louis Gray -- who espouses Democratic politics and Mormon religious beliefs -- blogs about tech and has worked at an app company called my6sense since August. He spent $321.81 on groceries last month at Safeway. Also during November, he rented dozens of movies and TV shows from Netflix, including "Pee-Wee's Big Adventure" and "Dexter," a Showtime series about a serial killer. He goes to the dentist at Great Smiles Care Dental in Cupertino, California. He's been there once in the past two months.

Welcome to the world of public living -- where most everything about a person's habits, location and preferences is just a few clicks away.

While Louis Gray's case is a bit extreme -- he posts publicly to two blogs, Facebook, Twitter, Foursquare and Blippy, a site that automatically uploads credit card purchases from the family Visa -- this type of digital laundry-airing isn't all that uncommon these days. A half-billion people use the social network Facebook, and each of those users posts an average of 90 "pieces of content" on that site each month, according to the company.

As people share more information about themselves online, the internet, in effect, has created a public transcript of consciousness -- storing our thoughts, locations, social lives and memories in data warehouses all over the world.

This has enabled technological advances and shaped our social interactions.

It's also really freaked some people out.

With a dearth of established, effective methods to manage online privacy, and with digital marketers looking to profit from users' online lives, some privacy advocates and everyday Web users worry people have lost control of their identities on the internet.

The benefits of sharing

For Silicon Valley types -- always the early adopters of technology -- this trend toward all-public living is awesomely useful.

"People have really gotten comfortable not only sharing more information and different kinds, but more openly and with more people," Facebook CEO Mark Zuckerberg said in a January interview with the blog TechCrunch. "That social norm is just something that has evolved over time."

All of this sharing leads to online friendships and forged connections, the social media mantra goes. Old friends are reconnected. Distant parents see pictures of their kids' day-to-day activities.

Eric Leist, a 22-year-old from Boston, said he found a job because he posted many details about his professional life online. "I feel like I benefit more than I put myself at risk," he said.

Living in public online also leads to a better Web experience, Zuckerberg said at a Facebook event in April. That's something Gray agrees with. Dozens of people comment on the pictures of his kids he puts online and on the credit card purchases he automatically syncs with Blippy.com. Putting this info out in the public means anyone can discover it and benefit, he said.

"We should err on the side of being open and transparent and participating in a community online rather than putting up these walls that make us live in secret," he said by phone.

Sharing also improves internet services. As companies like Facebook and Google learn about peoples' Web browsing histories, preferences and connections to other people, the sites are able to tailor content to the user.

Go to the music-streaming site Pandora, for instance, and you're likely to see pictures of your Facebook friends popping up on the page every time a song they like plays. Facebook and Pandora wouldn't be able to do that unless you told those sites what kind of music you like.

But there is, of course, a darker side to all this sharing.

Some privacy advocates say shared information may jeopardize personal safety. Earlier this year, a widely publicized site called PleaseRobMe.com collected status updates from Twitter and Foursquare that indicated a person was away from home. That info, in theory, could help burglars figure out the best time to break into a person's house or apartment -- when no one's there.

Even basic information on online social networks can be used what the U.S. government calls "social engineering attacks."

"Using information that you provide about your location, hobbies, interests, and friends, a malicious person could impersonate a trusted friend or convince you that they have the authority to access other personal or financial data," the United States Computer Emergency Readiness Team says on its website.

That happened to Beny Rubinstein last year when a hacker compromised his friend's Facebook page and falsely asked his Facebook friends for help. Rubinstein wired the hacker more than $1,100, thinking his real friend was in trouble in a foreign country.

Others say internet users may not realize how much information they're giving up just by browsing the Web.

Digital marketers like RapLeaf, for example, are getting better at sniffing through people's Web-browsing histories and online identities to compile user profiles that can be sold to advertisers.

These targeted marketing campaigns have drawn the ire of some members of Congress and the U.S. Federal Trade Commission, which, on December 1, called for the United States to create a "do not track" list for the internet, which would let users essentially opt out from all targeted marketing and tracking.

"Industry must do better," the agency says in its report, which warns consumers that if they use the internet, location-tracking smartphones or online social networks, they're likely sending information about themselves, and possibly friends, to an unknown list of advertisers and marketers.

There are tools available to internet users who would like to protect some aspects of their online privacy. Users can opt out of tracking by certain marketers, clamp down access to their social networking sites and employ online pseudonyms as a way to keep some info relatively private.

Privacy controls like these are widely used, especially by younger generations. A Pew Internet & American Life survey of people age 18 to 29 found more than 70 percent of them had changed the privacy settings on their social networking profiles.

But these tools only go so far.

Virtually any information posted online can become public in an instant. An info-thief easily could take a screen grab of a private Facebook message and post it on a public blog. Private Twitter feeds -- viewable only by people who the author approves -- can be "retweeted," or re-posted, onto the public internet. And third-party Facebook apps have admitted to taking information from app users, against Facebook's rules, and selling that data to advertisers.

Privacy settings on sites like Facebook have become so confusing that some users feel they've lost control of their privacy, said Sherry Turkle, an MIT professor and author of the upcoming book, "Alone Together: Why We Expect More from Technology and Less from Each Other."

Internet users these days have a "sense of always being tracked and always being watched," she said. That leads to people censoring themselves and presenting a version of their life that is "kind of inauthentic" -- much like they're performing in a play they know everyone will see, she said.

In the long term, these performance-based communications are dangerous for our personal relationships and for society, she said. They make us less human.

With privacy tools lacking, some social networkers have invented unique ways of controlling their online identities.

Dana Horst, a 28-year-old in Chicago, blogs and tweets under a pseudonym and has a private Facebook account -- efforts aimed at keeping her personal and professional lives separate.

"It could be a complete placebo effect," she said. "I don't have any great faith that privacy settings are impermeable. My mom is a friend on Facebook and I have things set so she can only see certain things (I post on the site), but would I ever be surprised if one day that went away?" No, she said, adding that she might have to offer her mom an apology: "Sorry I curse, Mom!"

Chanee Jackson, a 23-year-old in Atlanta, Georgia, said she only puts information on her Twitter, Facebook or Foursquare accounts if she'd also feel comfortable reading that info to a stranger in coffee shop -- or her mom. "You really have to manage your Twitter image," she said, adding that she keeps a second, private Twitter feed for personal conversations with close friends.

Some teens "deactivate" their Facebook accounts each time they log out of the site so that their friends can't alter their pages; and others delete every comment or photo posted to their Facebook walls as a way to maintain control over their increasingly important online identities, said Alice Marwick, a post-doctoral researcher and social media expert at Microsoft Research.

It's not that people don't care about privacy, Marwick said -- quite the opposite. People care about privacy, but websites like Facebook and Google haven't evolved to the point that online communications work in the nuanced way our real-life conversations do. Meanwhile, younger people are somewhat trapped because they need these online tools to function, she said.

"The teenagers and 20-somethings we talk to -- a huge aspect of their social life goes on online," Marwick said. "Not participating in online life is like not having a phone or not going to parties -- it's choosing to opt out of an important part of their social community. It's not really a choice for many young people."

So does that mean we have to give up privacy to function? Should we all, like Gray in California, start casting our credit cards, locations and baby photos into the ever-churning river of the internet?

And, if so, does that mean privacy -- a concept that, for centuries now, has been an important part of life in democratic societies -- is done for?

"Privacy is dead," Mashable's Pete Cashmore wrote on this site in 2009, echoing a popular refrain in the tech world. "And social media hold the smoking gun."

"I think we need to plan for all of our activities to be discoverable and indexable -- forever," he said. "Facebook is being very aggressive in terms of making things public that aren't previously public. Then you combine that with the deep archives of search engines."

People should act as if they're being watched, he said, and enjoy the benefits of having access to such a rich trove of personal information on the internet.

But perhaps things are still evolving.

Marwick, the social media researcher, said tools such as Facebook and Google -- as well as privacy-minded competitors like Diaspora and Path -- will continue to evolve, as long as users make it known that privacy is important to them.

danah boyd, who researches how people use social media tools with Marwick at Microsoft Research, put it this way in a speech at a March tech conference:

"Neither privacy nor publicity is dead," she said, "but technology will continue to make a mess of both."