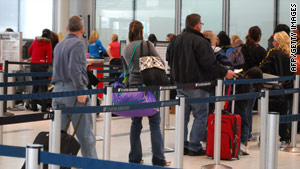 Washington (CNN) -- The Transportation Security Administration announced Sunday that it will begin enhanced screening procedures Monday on any U.S.-bound air passenger traveling through "state sponsors of terrorism or other countries of interest" such as Pakistan, Yemen and Nigeria.

The TSA said in a statement announcing the new measures that "effective aviation security must begin beyond our borders."

A senior government official, not authorized to speak on the record, provided CNN with the full list of 14 countries that fall under the TSA's "countries of interest" label -- which will automatically trigger the enhanced screening.

Another source, a senior State Department official who could not speak on the record due to the sensitive nature of the material, said the countries on the list are places "where we have concerns, particularly about al Qaeda affiliates."

The official said the State Department was heavily involved in compiling the list, along with Department of Homeland Security and other intelligence agencies. The State Department compiles the annual "Patterns of Global Terrorism" report, which details terrorism trends in countries around the world.

Passengers from other countries could still face enhanced security for other reasons.

Nations on the list
The TSA says air travel to the United States through "state sponsors of terrorism or other countries of interest" will trigger enhanced screening. A senior government official says 14 countries fall under that label:

State sponsors of terrorism, as listed by the State Department:

"Countries of interest," according to a senior government official:

Unlike many TSA security directives, this one does not have an expiration date and is intended to be "sustainable and long term," although the TSA will continually evaluate the mandate in light of intelligence, a federal counterterrorism official told CNN.

The TSA said any person flying into the United States who is "traveling from or through nations that are state sponsors of terrorism or other countries of interest will be required to go through enhanced screening."

The TSA did not elaborate on what those enhanced security procedures might entail. The directive was issued to domestic and international air carriers.

In addition, the directive also keeps in place a mandate -- issued after an attempted Christmas Day terror attack on a U.S.-bound flight -- giving pilots discretion to prevent passengers from keeping pillows and blankets on their laps during certain international flights, the official said. Also retained is the option for pilots to limit movement in the cabin on those international flights.

Federal authorities have charged Umar Farouk AbdulMutallab, 23, of Nigeria, in connection with the failed Christmas Day attack on a flight between the Netherlands and Detroit, Michigan. Authorities have said he tried to detonate explosives hidden in his underwear as the flight made its final approach to Detroit. The device failed to fully detonate, instead setting off a fire at his seat.