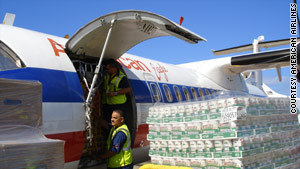 (CNN) -- Airlines, uncertain about when commercial service to disaster-ravaged Haiti will resume, are organizing relief flights and offering incentives to customers who donate to aid organizations.

The airline planned to send three more relief flights both Thursday and Friday. The first Thursday flight arrived in the morning, but the others have been delayed because of congestion at the Port-au-Prince airport.

The Haitian government is not accepting incoming flights because ramp space at the airport is full and no fuel is available, the Federal Aviation Administration said.

Smith said, "Given the current congestion at the Port-au-Prince Airport, we will delay our planned second humanitarian flight today until we are given permission to fly in."

Fuel shortages have not been an issue for the airline's relief flights, he said. Planes were carrying enough fuel for both the inbound and outbound flights from their origination point in San Juan, Puerto Rico.

Reports on Twitter that the airline is flying aid workers to Haiti are false, Smith said Thursday.

"Last night's hoax on Twitter about American and JetBlue flying doctors and nurses to Haiti for free was just that -- a hoax. We do not know who is responsible. We cannot fly any passengers to Haiti at this time," he said.

The airline is offering its frequent-flier program members mileage incentives for contributing to the Red Cross. Starting Thursday, members can earn a one-time bonus of 250 miles for a minimum donation of $50 or 500 miles for a donation of $100 or more through February 28, according to American's Web site.

"We invite our customers to join us in supporting the American Red Cross, and it is with our deepest appreciation that we acknowledge their generosity with this opportunity to earn AAdvantage miles," said Peter J. Dolara, an American senior vice president, in a statement.

American has suspended service to Haiti. Passengers with plans to travel there this month may change them without fee or penalty through February 14.

Spirit Airlines announced Thursday that it is working with the U.S. Department of Health and Human Services to provide relief to Haiti.

"We are dedicating aircraft for humanitarian aid efforts, including transporting medical aid teams and supplies to Port-au-Prince, and stand ready to assist in any way possible in bringing relief to our friends and neighbors in Haiti," Spirit Airlines CEO and President Ben Baldanza said in a statement.

Seats and cargo space on the humanitarian flights are full, the statement said.

Spirit Airlines, which operates one flight a day between Fort Lauderdale, Florida, and Port-au-Prince, has cancelled commercial service through Sunday.

Customers with reservations for travel to, from or through Haiti through January 20 may rebook their travel without penalty, provided the new departure is on or before February 28, according to the airline. The airline will waive the change fee for travelers who move their travel beyond February 28, but it will charge for any difference in fare.

The airline plans to resume flights as soon as commercial service reopens at the Port-au-Prince airport.

The airline will give 5,000 free Spirit miles to the first 200,000 members of its frequent-flier program who donate at least $5 to UNICEF, the Red Cross or Yéle Haiti. Members must register online to participate.

United Airlines Foundation announced Thursday that it will match up to $50,000 in monetary donations. The organization's International Response Fund is gathering donations from employees and customers at united.com.

The airline's employees and frequent fliers may also donate miles to relief efforts as part of its Charity Miles initiative.

"We also have no current plans to operate charter service as we have not received an 'official' request from the government or our partner relief organizations," he said.

JetBlue Airways is flying relief workers from agencies such as the American Red Cross free of charge to Santo Domingo in the neighboring Dominican Republic, spokeswoman Alison Croyle said. All workers must have been vetted by the Haitian Consulate. The consulate will arrange transportation for those workers to Port-au-Prince, she said.

JetBlue does not fly into Haiti, but the airline is waiving change fees and fare differences for passengers who were scheduled to fly into neighboring Dominican Republic between Wednesday and Sunday. Passengers may rebook flights between the same cities to depart anytime through Wednesday, according to the airline's Web site.