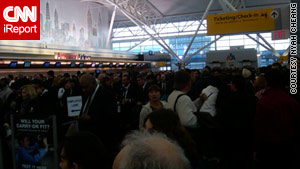 The incident prompted authorities to evacuate a terminal, disrupted travel, and delayed hundreds of passengers.

Bouloute was returning from earthquake-ravaged Haiti. He had taken a connecting flight to JFK from Orlando, Florida.

The Transportation Security Administration said the breach occurred at about 3:30 p.m. when an individual entered the secure "sterile" area in Terminal 8 through a nonpublic, employee door used by the airlines.

A first-hand account: JFK airport a sea of people

Earlier this month, a man was charged with trespassing after allegedly breaching security at Newark Liberty International Airport in New Jersey.

In that incident, Haison Jiang, 28, of Piscataway, New Jersey, faces a charge of defiant trespass after allegedly ducking under a rope and walking the wrong way through security to greet a woman. The incident shut down Terminal C for hours and forced the rescreening of thousands of passengers.