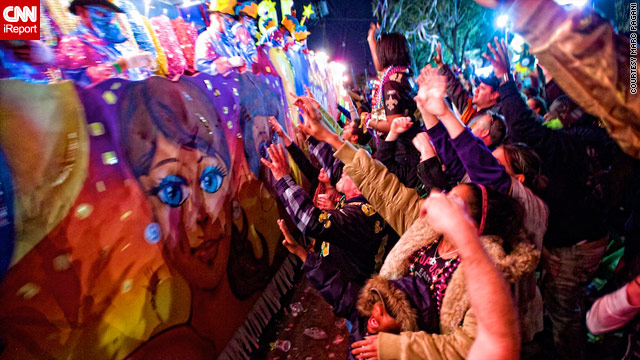 (CNN) -- The merriment and mayhem of Mardi Gras comes to a climactic end on Fat Tuesday. But where did the celebration begin?

Despite the holiday's rich history in New Orleans, Louisiana, Mayor Sam Jones of Mobile, Alabama, says the first Mardi Gras celebration in this country actually took place in his city, and most Mobile natives agree.

• The Mobile Area Chamber of Commerce says the city's first Mardi Gras celebration was in 1703, just a year after the city was founded.

• Mobile claims it introduced the celebration to New Orleans years later. "It was in 1857 that the Mobile members of the Cowbellian de Rakin Society, formed in 1830, traveled to New Orleans and assisted with the formation of the Krewe of Comus, considered New Orleans' most prestigious Mardi Gras society," according to the Chamber's Web site.

• The first recorded Mardi Gras parade in New Orleans was in 1837. The city's first parade with floats was in 1857, apparently after assistance from Mobile.

• Legend has it that French explorer Pierre Le Moyne d'Iberville first introduced Mardi Gras to the area in 1699, after he sailed into the Gulf of Mexico on March 6 (Fat Tuesday), and set up camp on the west bank of the Mississippi river about 60 miles south of New Orleans. He named the site Point du Mardi Gras, in honor of the holiday which had been celebrated in Paris since the Middle Ages.

• The true origins of Mardi Gras can be traced all the way back to ancient Greece and Rome, when early Christians with Pagan roots feasted and celebrated ahead of the somber days of Lent.

Whether revelers on Bourbon Street choose to accept that is up to them. Either way, the party goes on!

Got something that needs checking? E-mail us at factcheck@cnn.com