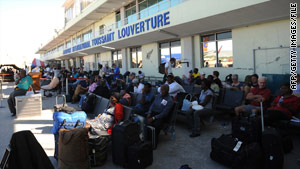 An American Airlines flight from Miami to Port-au-Prince, Haiti, left at 7:36 a.m. ET after about an hour's delay, according to the airline's Web site. The flight landed at 9:22 a.m. ET in Haiti, the company said.

Commercial air service from the United States to Haiti had been suspended since the January 12 earthquake. The Haitian government says at least 212,000 people died in the magnitude-7.0 quake.

The quake damaged many of the country's buildings, including some at Toussaint Louverture International Airport in the Haitian capital.

Full coverage of the Haiti earthquake and aftermath

American has said it plans three flights a day from Florida to Haiti.

"This is that crack in the dam that we so badly needed and our passengers so badly wanted, to start moving regularly scheduled traffic into and out of Haiti," spokesman Tim Smith recently said.

"We'll start out with three main flights a day from South Florida, two from Miami and one from Fort Lauderdale. Then we'll also fly a JFK New York flight into Haiti four days a week."

Haitian customs officials will work out of a cargo facility because of damage at the main terminal, Smith said.

"These flights serve as major milestones toward helping the country rebuild," Peter Dolara, American's senior vice president for Mexico, the Caribbean and Latin America, said in a recent news release.

"With commercial air service restored, we can better connect loved ones and provide consistent transportation to and from Haiti."

"We have begun our journey to recover from the catastrophic earthquake, but with support from companies like American Airlines, we hope it won't be nearly as long," said Ralph Latortue, consul general of Haiti in Florida

American has served Haiti since 1971 and employs more than 100 people in Port-au-Prince, according to the airline.

Since the day after the earthquake, American Airlines and American Eagle have continued flying into and out of Haiti, carrying relief workers, medical personnel, humanitarian aid and evacuating hundreds of people.

Representatives of Spirit Airlines and Delta Air Lines said this week that they were working to restore air service to Haiti.