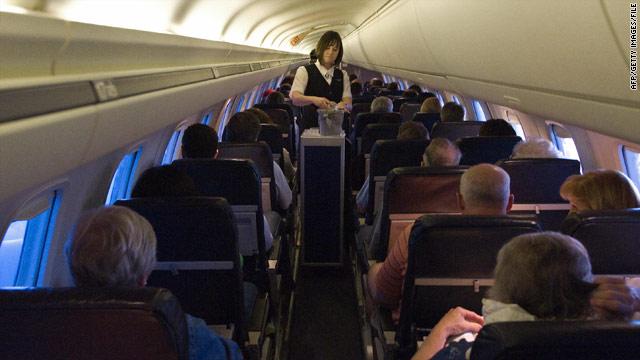 Passenger flights generate millions of pounds of waste, but only a fraction of recyclables are salvaged, a nonprofit group says.
STORY HIGHLIGHTS

(CNN) -- Mark Ashley watches with a weary eye whenever flight attendants walk up and down the aisles of a plane to collect the trash on his flights.

Items that he would normally separate for recycling at his home and office are often dumped into a single bag on planes.

So copious amounts of empty soda cans, plastic bottles and cups, as well as discarded newspapers -- all of which could be salvaged -- probably end up as garbage.

"I think about how many pounds go up in the air and then just go straight into a landfill," said Ashley, 37, a college administrator in Winston-Salem, North Carolina. He flies once a month and writes the Upgrade: Travel Better blog.

"[Some carriers] are not even trying. They're not even putting on the theater of recycling, if you will."

A new report by the nonprofit environmental group Green America reveals that many of the airlines commonly flown by Americans have a long way to go when it comes to recycling the massive amounts of waste generated on passenger flights.

Subtitled "The Sorry State of Recycling in the Airline Industry," the report cites startling statistics from the Natural Resources Defense Council, including this: Airlines in the U.S. throw away enough aluminum cans every year to build 58 new Boeing 747s.

Here's another statistic to consider: Each passenger leaves behind 1.3 pounds of trash -- three-quarters of which is recyclable, but only 20 percent of which is actually recycled.

Who gets failing grades?

The Green America report gave Delta and Virgin America the best grades when it came to airline recycling programs, with both receiving a "B-." United Airlines and US Airways came in at the bottom of the list, both getting an "F."

Green America assigned the rankings after reviewing corporate social responsibility reports and other publications produced by the airlines. It also sent each carrier an in-depth survey regarding its recycling practices.

"Some airlines answered questions that we sent to them pretty thoroughly, and other airlines directed us to their Web site," said Todd Larsen, Green America's corporate responsibility director.

"In general, we found the airlines could do far better about disclosing about recycling practices as well as other environmental practices on their Web sites."

Delta is furthest along among all the airlines studied in the report, Green America said.

"We are continuing to identify opportunities for us to improve in the area of recycling, but to date feel we've made significant strides as relates to our in-flight recycling program," Delta spokeswoman Susan Elliott said.

Delta does not recycle on international flights, however, which is one of the reasons it failed to receive an "A," according to the study.

(The U.S. Department of Agriculture regulates waste generated on international flights, which complicates recycling, but shouldn't prevent it, the report says.)

At the other end of the spectrum, United has "one of the most limited programs in the industry" and US Airways is behind all carriers but United, Green America found.

In response, United said it is committed to taking actions that reduce its impact on the environment and recycling is a top priority.

"We are collaborating with our catering partners to expand our onboard recycling programs that began in Hawaii and California to many of our U.S. routes later this year," said Sarah Massier, the airline's spokeswoman.

US Airways did not respond to a request for comment.

Ashley, who often flies on US Airways, said he wasn't surprised by the airline's low score.

"There has been no visible effort to separate any trash. They're not even making an effort for show," he said.

How you can take action

Some of the airlines said that one reason they did little recycling was because the airports they fly into don't have facilities to support such a program, Larsen said.

But Green America doesn't think the argument holds up since other carriers have figured out how to recycle even if the airports they frequent aren't geared up for it.

"They might say that there's a cost involved, but obviously the cost involved in doing recycling is pretty low," Larsen said.

Green America, which included Virgin Atlantic and British Airways in its report because they are popular with Americans, hopes to take a closer look at other international airlines in a future study.

Ashley, who spends about a quarter of his travels outside the country, has found that European carriers seem to have better-established recycling programs.

"[Germany's] Lufthansa, for example -- they're very deliberate about dividing up the trash when they come to pick it up," Ashley said.

Green America hopes its report, combined with passenger awareness, will spur the airlines into action.

"A lot of companies will do something that's green if they feel there's public support for doing it," Larsen said.

What can you do?

Green America suggests concerned passengers can take action by asking flight attendants whether any items are recycled; removing their own cans, plastic bottles and newspapers from the plane and recycling them at the airport; and writing to the airlines to urge them to do more.

Green America is also asking passengers to share their experiences and observations on flights by filling out a form on its Web site. The information will be used to "track the reality of what is being recycled," the group says.