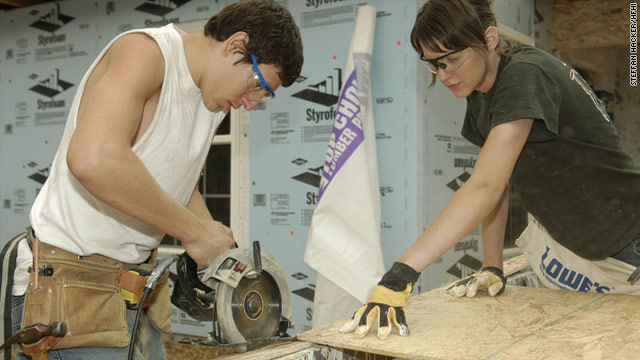 (CNN) -- When the going gets tough, the compassionate get going.

"We've seen a tremendous uptick with groups interested in coming to Haiti," said Brett Curtis, chief operating officer of Youth With a Mission San Diego-Baja, a Christian organization that organizes service trips for young people. "We haven't turned any away yet. We're telling them we'll have some information in the next few weeks about how they'll be deployed."

Projects-Abroad.org reported it received 46 percent more applications than expected since the earthquake.

"Absolutely, we're seeing an increase," she said. "Particularly I think it's those people who perhaps had thought of the idea before and this has spurred them into action to say, 'Hey, I've been wanting to try this. Now's the time.' "

A group called REACH -- Reconstruction Efforts Aiding Children without Homes -- is seizing the moment. The group has scheduled nine trips between March and August for volunteers to work on a construction project at a large orphanage in Les Cayes, Haiti. Volunteers will pay a minimum of $1,775 plus airfare for the trip, the group says.

However, it may not be the time for many unskilled volunteers to flood into Haiti. Many organizations are advising people on other ways or places they can help.

"Because of logistics and security, we're not in a place right now where we're bringing volunteers into Haiti, and it may be a while before we are able to do that," said Desiree Hadaway, senior director of volunteer mobilization with Habitat for Humanity International. "Because we won't do it until we know that people can be safe and have a really great volunteer experience."

To boost the battered Haitian economy, Habitat is hiring local residents to do some work in Haiti that otherwise would be done by volunteers, Hadaway said.

"We want to have groups there this summer but we need to know it's feasible or see if we should wait a year," he said. "We definitely don't want to get in the way of people providing aid at this time."

Chile also suffered a severe earthquake on February 27. As was the case in Haiti, the greatest need in Chile at the moment is highly trained first responders. Chile is more developed and self-sufficient and so far has not requested outside help.

However, before the earthquake there were opportunities to volunteer at schools and on environmental projects in Chile, so interested travelers may still want to check into those.

Would-be volunteers are being encouraged to seek first-responder and search-and-rescue training at home, so they can be part of the first wave of help the next time disaster strikes, Idealist.org's Barnhart said.

"With past globally impacting events, for example the 2004 tsunami, there was a surge in interest, in people saying, 'What can I do to lend a hand myself? I'm willing to travel, I have vacation time, I want to do something meaningful with my time off,'" Barnhart said.

There are plenty of opportunities.

For example, between now and April 3, Campus Crusade for Christ is expecting at least 2,500 students to attend its weeklong "Big Break" conferences in Panama City Beach, Florida, where they will pack 1 million nutrient-rich meal kits for Haitians.

"I'm hearing from students around the country who are excited about this opportunity to help ease the suffering in Haiti in a tangible way," said Mark Gauthier, the group's national director of U.S. campus ministry.

Indeed, "We're five years out of Hurricane Katrina, and there are still opportunities for people to volunteer," Barnhart said. "There's always going to be a space for people who are willing and able to help."