How safe is your cruise ship? 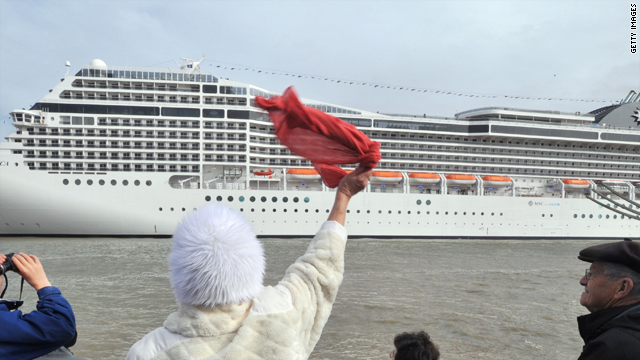 (CNN) -- The terrifying moments on board the Louis Majesty, a cruise ship hit by 26-foot waves off northeast Spain, may be prompting second thoughts among travelers considering a vacation at sea.

Two passengers were killed and 14 people were injured when water violently crashed through the windows of some of the ship's public areas this week.

The incident brought to mind scenes from "The Poseidon Adventure," a movie in which a wall of water completely flips a cruise ship.

But could that actually happen away from a Hollywood movie screen? And how well are cruise ships equipped for extreme weather?

Experts said waves like those that struck the Louis Majesty are extremely rare and should be of little concern to the average cruise ship passenger.

"Cruise lines are operating on a weekly basis, they're always at sea and there's a very, very, very low frequency of these incidents happening," said Cmdr. Buddy Reams, the chief of the Coast Guard's Cruise Ship National Center of Expertise.

"We have a really rigorous safety protocol that we go through for each of the cruise ships that operate [in the U.S.] and it's primarily because they're carrying so many passengers."

Several industry insiders weighed in on common questions travelers may be asking about the safety of cruising after this week's incident.

How likely would it be for a cruise ship to encounter a wave that might tip it over?

Not very likely. In fact, Richard Burke, professor and chairman of engineering at the Maritime College of the State University of New York, said he would be as worried about it as an asteroid hitting the Earth.

"Encountering a storm at sea and having the ship moving around and possibly getting seasick, those things happen. But we're talking about waves of extraordinary magnitude that are very, very rare," Burke said.

The chances of a "Poseidon Adventure" disaster happening on a modern ship are virtually nonexistent, said Harry Bolton, captain of the training ship "Golden Bear" at the California Maritime Academy.

The only way that it could happen is if the ship were in extreme weather and positioned sideways to a 70- to 100-foot wave that would have the potential of rolling it over, Bolton said.

"I guarantee you're never going to be in those kinds of waves anyway," he said. "[Cruise ships] avoid bad weather like the plague. They don't want the passengers in peril, they don't want to risk any injury or accidents."

How far can a cruise ship lean over to one side and still recover?

Pretty far, though most passengers will likely never experience the extreme.

Cruise ships can list a lot so they can withstand heavy waves, said Teijo Niemela, editor and publisher of the "Cruise Business Review," which follows cruise ship design.

In extreme cases, a ship can actually list 60 degrees and recover, Burke said. (An angle of 90 degrees would be the ship lying on its side.)

"If you've ever been on a ship that's listing 20 degrees, you almost can't walk on the ship. Walking up a 20 degree slope is like mountain climbing," Burke said.

"So if a ship heels more than that, your real problem is that you're going to get thrown off your feet and a lot of equipment and furniture is going to break loose and go flying around. So the possibility of injury is very high when that happens. But the ship should right itself without any problem."

The biggest roll Burke has ever experienced during his time at sea was 45 degrees, he said. "I really don't want to go through that again."

Cruise ships seem to be getting bigger and taller. Does that affect their stability?

It may appear that cruise ships are top heavy visually, but naval architects design them in such a way that all of the heavy liquids, machinery and the main engine are positioned very low, Burke said. So the ship's center of gravity is also low even though it looks like the structure goes up high.

"It literally blasts water from one side of the ship to the other side so that you can take a ship that might be rolling 20 degrees and you turn on the anti-heeling system and it'll knock that thing right down to a 5 degree roll. It's incredible," Bolton said.

Niemela, who has sailed on the huge new cruise ship Oasis of the Seas a couple of times, said it's very difficult to feel any kind of movement on board.

If there is a tsunami warning, like the one last week around Hawaii, is a cruise ship in danger?

Not unless the ship is still docked in port. A tsunami would go by entirely unnoticed on the open sea, Burke said. But if the ship were still at port, an arriving tsunami would be devastating.

How are passengers notified if there's an emergency at sea?

Before a ship leaves port, the crew holds a fire and boat drill for the passengers. They sound the signals that would call people to their lifeboat stations if there is an emergency so everybody gets to hear the sirens before the ship leaves, Burke said. They're very loud and they're located throughout the ship.

"It's really important if you take a cruise that you participate in the drill and you do see where your lifeboat station is and you know how to get there," Burke said.