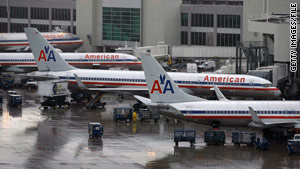 American says it will meet with the FAA to discuss the proposed penalties.
STORY HIGHLIGHTS
RELATED TOPICS

The airline said it would review the proposed penalties and meet with the FAA to discuss them.

"American Airlines is very proud of our safety record and our employees' commitment to safety every day," the company said in a statement issued Friday. "Safety is fundamental to the American Airlines culture and to our success."

The fines encompass three incidents beginning in March 2008, when American Airlines failed to follow a directive on the inspection of rudder components on certain Boeing 757s, according to the FAA. Four of its 757s did not comply with airworthiness requirements as a result.

In April 2008, the airline allowed one of its jetliners to fly 10 passenger flights after mechanics diagnosed a problem with one of the plane's central air data computers, according to the agency. During that time, the flight crew members were led to believe that both computers were working properly.

That violation resulted in the bulk of the penalties announced Friday at $625,000, the FAA said.

In the third case, mechanics at American Airlines returned a MD-82 jetliner to service in May, even though several steps of its maintenance schedule had not been checked off as completed, the agency said.

The aircraft was flown for two passenger flights with the logbook error, and an FAA inspection of the plane revealed several discrepancies in the tail sections, including loose screws and a missing nut plate.

American Airlines stood by its safety record Friday, saying in its statement, "AA is the only U.S. airline that continues to handle the majority of its heavy maintenance with in-house, FAA certificated mechanics that have met and passed all FAA experience requirements, written tests, and practical examinations."

Last month, the FAA proposed a $2.9 million fine against American Eagle Airlines -- a sister company to American Airlines -- for allegedly conducting more than 1,000 flights with planes whose main landing gear doors had not been repaired in a manner prescribed by the agency.

The agency had ordered the repairs in August 2006, and it said American Eagle flew the four Bombardier regional jets in February and May 2008.

American Eagle had responded in a statement that it was "disappointed" in the FAA's actions, saying the airline did not endanger the public and a fine was unwarranted.

That fine came just weeks after the agency proposed a $2.5 million fine against the airline for allegedly operating flights without adequately ensuring the weight of baggage was properly calculated.

The proposed fines this year are the latest in a string of multimillion-dollar fines the FAA has proposed against airlines for failing to follow repair orders. In October, the FAA proposed to fine US Airways $5.4 million and United $3.8 million for other maintenance violations.

In March 2009, Southwest Airlines agreed to pay $7.5 million to settle a complaint that it flew unsafe planes.