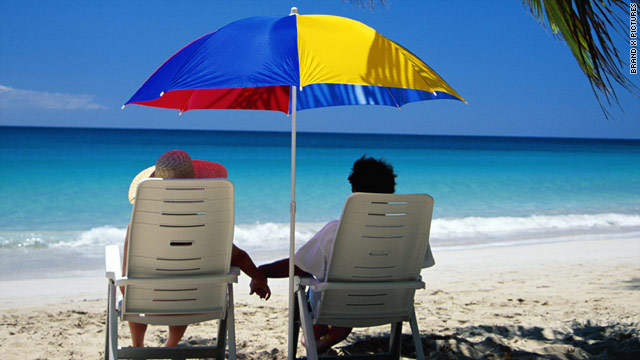 The winning couple will be sent to resorts in Africa, Europe, Asia and the United States.
STORY HIGHLIGHTS

(CNN) -- Wanted: Luxury-loving couples available to globetrot for six months and get paid to test out the most romantic wedding and honeymoon destinations around the world.

It's a hard offer to resist, but what's being described as "The Ultimate Job" is just the latest in a series of recent dream positions to capture the public's imagination and serve as a brilliant marketing tool for people and places.

"It's been sort of crazy," said Rosemarie Meleady, managing director of RunawayBrideAndGroom.com, describing the response to the new promotion.

The Irish travel agency came up with the idea in part after seeing last year's blockbuster "Best Job in the World" campaign in Australia.

More than 1,000 couples have applied for the chance to be sent to resorts in Africa, Europe, Asia and the United States.

Video: Get paid to be waited on at the beach
RELATED TOPICS

The winners will be asked to blog about their experiences a few times a week "when they can get out of the hammock after sipping a glass of champagne," Meleady said, and write for The Irish Times once a month.

You didn't have to be Irish to apply, but you did have to tout Ireland as part of the process.

"We've had applications from Korea, China, Macedonia, Croatia, India and Saudi Arabia," Meleady said before the deadline. "They're coming in about five every hour -- I'm working around the clock."

There also was high interest from the United States, with one couple who is to be married in a California vineyard this summer vowing to cancel their plans if they win so they can get hitched in Ireland instead.

The travel dream job craze exploded onto the scene in January 2009 when Australia's Tourism Queensland announced it was seeking someone to spend six months on Hamilton Island in the Great Barrier Reef.

The person was to be paid almost $140,000 to blog about the experience and promote tourism in the area -- or the "Best Job in the World."

Ben Southall, a 34-year-old British man, beat out 34,000 other applicants for the gig, which ended earlier this year.

"I think I've done more in these six months than I've done in the previous 34 years of my life. To be able to do this sort of thing, in this location, and report on it can't really be classed as work," Southall told CNN as he prepared to return home.

Last fall's "67 Days of Smiles" campaign by the Orlando/Orange County Convention & Visitors Bureau in Florida paid a couple $25,000 to spend 67 days visiting every theme park and attraction in Orlando and -- you guessed it -- write about it.

I had a lot of spectacular times, but it was never a vacation
--Hardy Wallace, former wine country lifestyle correspondent

Then there was the "Really Goode Job" created by the Murphy-Goode winery in Healdsburg, California. About 2,400 people applied last spring to become the company's "wine country lifestyle correspondent" -- a person tasked with promoting the winery through social media sites. The six-month gig paid $60,000.

"It was the most fun job I've ever had in my life," said wine aficionado and blogger Hardy Wallace, 36, who was selected for the position just a few months after he was laid off from a sales and marketing job in Atlanta, Georgia.

He knows what you're thinking: The gig probably amounted to nothing more than sipping wine and visiting a few Web sites, right? Wrong, Wallace said; it was actually a ton of work. In six months, he wrote 200 blog posts, shot 45 videos, sent 7,000 tweets and attended numerous events to promote the winery, he recalled.

"I had a lot of spectacular times, but it was never a vacation," Wallace said.

The job opened up many doors when it ended last month, and Wallace now permanently lives in Sonoma County, California, splitting his time working for two small wineries he's always admired, he said.

"A year ago, I was unemployed, and I was trying to figure out how to make this work. And when I think of everything that's happened in the past year, I'm extremely grateful," Wallace said.

Some of the companies behind the campaigns are probably very grateful too.

The "Best Job in the World" generated tens of millions of dollars in free publicity for Tourism Queensland thanks to bloggers and media outlets fascinated by the story, said David Meerman Scott, a marketing strategist and author of "The New Rules of Marketing & PR."

He travels all over the world as a speaker and has been asking audiences in countries like Japan, India, Estonia and Latvia whether they have heard of the Australian campaign. On average, 20 percent of people raise their hands.

"That's remarkable -- that you can do something which doesn't cost a lot of money, compared to television commercials, and 20 percent of the world ... has heard of it," Scott said.

The chance to go to exotic places was a big selling point in the "Best Job in the World," and copycats have followed because travel is associated with luxury and it's something lots of different people can write about, Scott said.

RunawayBrideAndGroom.com can attest to the allure of globetrotting and the power of viral marketing. The company's Web site has had 100,000 hits since announcing "The Ultimate Job," Meleady said.

"It snowballed, it's so exciting," she added.