Editor's note: CNN's Insider Trip Tips taps staffers around the globe for a local's look at places where they work and live.

"It's incredibly proper and restrained but then has the most outlandish behavior (at times) I've ever seen," Lah said. "That contradiction means endless material for me as a news reporter."

Lah has been in Tokyo for two years, and the otherworldly feeling of living in Japan has yet to fade.

"[Visitors] will most assuredly feel like they've landed on another planet," she said.

The mix of ancient and very stylish, modern culture is fascinating to see.

"Visitors will find an electric, hip energy all over Japan, amid an incredibly ancient world. Everything's either 400 years old or brand new," Lah said.

CNN.com asked Lah to share some of her best tips for Tokyo visitors. 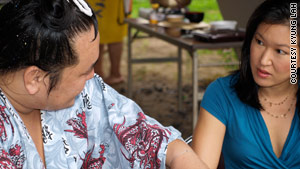 Hmmm, I'd say for families, you go to the Tokyo Metropolitan Government Building in Shinjuku. It's free and a great view. I'd say if you're on a date, the lobby bar at the Ritz at Tokyo Midtown or the New York Grill in Shinjuku are your best nighttime/drink/view spots.

Harajuku, by far. That's the fashion district, and you'll see some fun and hip fashions that never make it into the fashion magazines. I actually saw a woman wearing a hot pink bra as a hat. And it looked good.

Shibuya. I love how young and hip it is and that it's super vibrant. I am a fan of historical Japan, but there ain't nothing like the hip lights of Shibuya to get me excited.

That it's crowded. It IS crowded, but it doesn't feel as crowded as Manhattan, because everything is so orderly. Everyone walks in an orderly manner as well!

The snowboarding slopes. I'm not much of a spa girl. I like to get out and have fun to relax. I like Gala (it's less than a hour away from Tokyo via bullet train).

Tsukiji Fish Market. At 5:30 a.m., the tuna auction begins. Then eat sushi for breakfast at Daiwa Sushi Bar, and you've done one of my favorite mornings in Tokyo.

See above. ... Tsukiji is a tourist trap, but it's worth it. It's a little hard to get to, so you don't get too bombarded; don't sweat it too much. I'd say skip the Tokyo Tower. I have no idea why people think it's cool.

Temple omiyagi, which is a temple souvenir. They sell little "good luck" charms that are written in Japanese. They're pretty, cheap and fun.