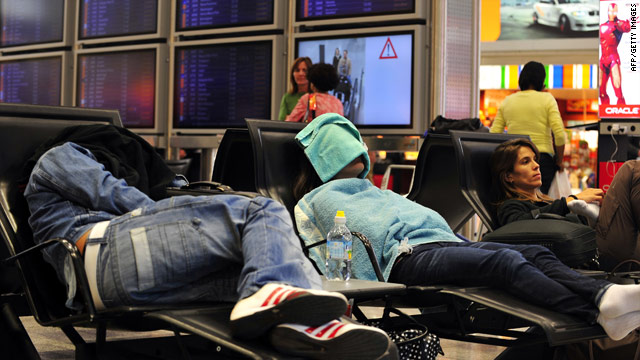 Air travelers in Frankfurt, Germany, stretch out Friday while they wait for service to resume.
STORY HIGHLIGHTS
RELATED TOPICS

(CNN) -- Yvonne Simons was hoping to make it to Amsterdam on Friday to spend time with her father before he has heart surgery next week.

She was scheduled to fly out of Newark Liberty International Airport in New Jersey on Friday afternoon, but after receiving conflicting messages from Continental Airlines and spending hours on the phone Thursday and Friday, her flight was canceled. Simons, executive director of the Anne Frank Center in New York, is also planning to mark the 50th anniversary of the Anne Frank House on April 28.

Simons was upset when she was told she wouldn't be able to get to Amsterdam until Thursday, missing the time with her father. But Friday afternoon, Continental booked her on a Monday flight.

"The lady I spoke to this morning who tried to help me, really did at the time ... she tried from Frankfurt, to Brussels, to Munich, and nothing worked. But she said that many folks were canceling also. To keep trying at home," Simons wrote in an e-mail.

"She called me back saying she had kept checking after she spoke with me and one popped up as we spoke," she said. Simons said she and her father are both very happy she won't miss their visit.

Travelers across the globe haven't all been so fortunate as they seek information about travel in and out of Europe, where airspace in more than a dozen countries has been completely or partially closed by a volcanic ash cloud that drifted in from Iceland.

iReport: Have your plans been disrupted? Share your stories

According to the Air Transport Association of America, U.S. carriers have canceled 196 flights so far Friday between the U.S. and volcano-affected areas in Europe. About 16,000 flights across Europe have been canceled, according to Eurocontrol, the intergovernmental body that manages European air travel.

As of Friday morning, Continental had canceled 57 flights between the U.S. and Europe, spokeswoman Mary Clark said.

American Airlines canceled almost all of its flights to and from the UK and Europe on Friday, totaling 56 flights, according to spokesman Tim Smith.

Simons has a friend stuck in Amsterdam at the other end of the route. He was on the runway Thursday when his flight was canceled, she said. He was told it might be six days before he can return home to New York.

U.S. airlines canceled hundreds of flights to Europe on Thursday and pre-canceled many of Friday's departures. Most are permitting travelers to make one-time changes to their tickets free of charge for scheduled travel to Europe in the next few days. Customers with canceled flights will be eligible for refunds.

Some runners scheduled to participate in Monday's Boston Marathon in Massachusetts may not be able to make the race, marathon officials told CNN affiliate WCVB.

Not all travelers are disappointed to be stranded. iReporter Franko Haller, of Zagreb, Croatia, sent CNN a report titled "Stuck in Tokyo ... but I do not mind."

His flight from Tokyo through Paris was canceled.

"I was put on first available flight which is on next Tuesday. Luckily enough, I extended my stay in Tokyo at a hotel with a room view over the Tokyo Bay, as hotel manager assistant was kind enough to give me a special room price because of the situation," Haller wrote on iReport.com.

He's due to start classes and a part-time job, and he and his best friend are hoping to get out of Tokyo before they run out of money, he said. Haller said they haven't been able to get much information from Air France. Still, he's making the best of it.

"As far as it goes, it seems that I'll have to do some pre-course work from Tokyo (LOL)."