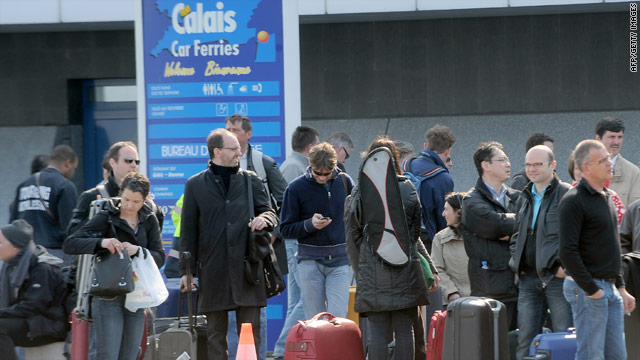 Travelers prepare to board a ferry to Dover, England, on Monday at the Calais harbor in France.
STORY HIGHLIGHTS

(CNN) -- Joey Cummins' uncle, who suffers from multiple sclerosis, became very ill while his parents were on a cruise that sailed from Barcelona, Spain.

"They did get to go on their cruise, but he took a turn roughly halfway through, and [they] have been fighting a losing battle to get home ever since," Cummins, 28, a landscaper in Dublin, Ireland, wrote in an e-mail.

When his parents' flight to Ireland was canceled because of the volcanic ash cloud drifting over Europe, Cummins started trying to organize transportation for them and their friends. He posted a message online looking for enough travelers to fill a chartered bus.

Elizabeth Varley linked up with Cummins on Twitter. She has been trying for three days to get her parents to London to meet her husband-to-be. The volcanic ash caused them to miss her engagement party this weekend.

Varley hasn't seen her parents, who live in Australia, for two years.

"They've never met my fiancé. So I'm desperate to get them here before they have to turn around and try to get back to Australia," Varley, 33, wrote in an e-mail.

Strangers and travelers across the web have been finding and helping each other get where they need to go since a volcanic ash cloud arrived from Iceland last week, closing airspace across much of the continent.

Varley's parents are about to get one leg closer to their daughter, who worked with Cummins and another person to arrange the buses from Barcelona -- where her parents ended up after canceled flights within Europe -- to ports in France.

The third organizer, Sarah Bill, a student teacher in Dublin, Ireland, connected with Varley on Facebook. One of the passengers on the buses leaving Barcelona on Tuesday will be her 20-year-old brother, Andrew, who made his way to Barcelona when he couldn't get home from his vacation in Portugal.

Facebook, Twitter, web forums and word of mouth connected more bus passengers with the ride to France, Bill said. "We found people all trying to do the same thing and work together."

More than 100 passengers were originally scheduled to take the buses, but many dropped off at the last minute with news of airports resuming operations, Cummins said.

Some travelers are linking up to carpool between European countries.

Florence, Italy-based website RoadSharing.com, where travelers can arrange share rides for free, has seen a huge spike in traffic from travelers trying to get to destinations all over Europe.

The site usually has 2,500 to 3,500 unique visitors each day, according to a spokeswoman. On Monday, the site had 17,000 unique visitors in a few hours, and travelers entered even more ride information on Tuesday than on Monday.

Fadela Seddini, who was in Italy for a furniture exhibition, posted a ride offer for travelers trying to get from Milan to London. Her fiancé is sending a car from London to pick her up after her British Airways flight was canceled Monday.

More than 30 people contacted her via RoadSharing, Facebook, e-mail and phone about space in the car for five or six passengers, she said. The ride will cost 250 to 300 pounds per person, the RoadSharing post said.

For many travelers and their loved ones, getting to their destinations has been quite an odyssey.

Varley's parents were scheduled to fly from Istanbul, Turkey, to Munich, Germany, and on to London. Instead, they made their way to Spain, and when the bus from Barcelona arrives in Calais, France, they'll try to catch a ferry across the English Channel.

From the port, Varley has arranged shared transportation to get them to London.

"I can't wait to see them. ... A shame they missed our engagement party, but I can't wait for them to meet my wonderful fiancé. I know they'll all love each other."