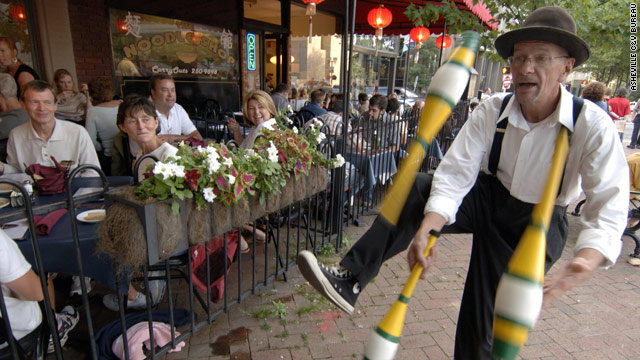 (CNN) -- President Obama and his family are spending this weekend on a mini-vacation in Asheville, North Carolina, nestled in the Great Smoky Mountains along the picturesque Blue Ridge Parkway.

The first family will stay at the Grove Park Inn, a 512-room resort that makes Fodor's list of "Top 10 Luxury Spa Resorts" and earns four diamonds from AAA. No word from the White House on whether Obama plans to use a AAA member discount.

Asheville's most famous attraction is Biltmore, the estate of millionaire George W. Vanderbilt II (1862-1914). The main feature of the 8,000-acre estate is Biltmore House, a 250-room mansion billed as "America's largest home."

Sites and activities at Biltmore, a national historic landmark, include horseback riding, rafting, a winery and a four-star restaurant.

Asheville is known as an artist-friendly community with numerous small shops and galleries, including the River Arts District, a collection of former warehouses that now serve as studios and galleries.

Obama and his campaign team visited Asheville less than a month before his election in 2008. He stopped in at 12 Bones Smokehouse, a popular barbecue joint, and bought a lot of food.

"I think the Secret Service guys were fans," 12 Bones co-owner Sabra Kelley said with a laugh.

Will the president come back with the family?

"My guess, honestly, is that he'll probably send somebody to get takeout from us," Kelley said. "I doubt he'll come in himself just because he wants to try some other places, I would think.

"There's a lot of good places in town. We've got pretty good food here for a small town."

The artistic flavor spills into Asheville's cuisine, served up at a bevy of edgy restaurants and sidewalk cafes, along with microbreweries and farm-to-table eateries in what a local collective calls a "foodtopian society."

Asheville's Pack Square has been a central feature of Asheville since the town's founding in 1797. The city's art museum sits on the square.

Asheville boasts more Art Deco architecture than any Southeastern city other than Miami Beach, Florida, according to the Buncombe County Tourism Development Authority.

The city's eclectic musical taste leaves plenty of room for opera, jazz, blues, classical and, of course, country. Asheville even has its own drum circle.

Special events taking place in Asheville during the Obamas' visit include the inaugural All Go West street festival on the west end of town and an International Children's Festival at Vance Elementary School.