Europe flights back to '100 percent' 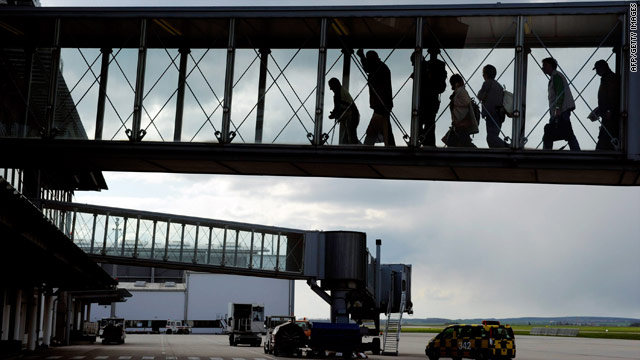 London, England (CNN) -- Flights across Europe are expected to return to "100 percent" on Thursday -- seven days after ash from an Icelandic volcano forced the shutdown of airspace and stranded thousands of passengers around the world, the air traffic agency Eurocontrol said.

The mood among passengers was one of cautious optimism. After days of endless waiting, many reserved their celebrations for when they were airborne.

"I think when we land down in America, then we'll know we're there. But at the minute, we're a bit cautious," said Georgina Evett.

She was part of a group trying to fly from Manchester, England, to Florida for a world cheerleading championship this week.

Video: Lufthansa leaving no passengers behind

Manchester Airport was among many where flights are now taking off and landing.

The crisis set off a surge of emergency requests from stranded Americans, prompting the U.S. State Department to scramble to arrange everything from housing to, in one case, dialysis treatment for an elderly patient in Frankfurt, Germany.

In addition to clearing a massive backlog of passengers and cargo, airlines now face financial headaches as well as logistical ones.

Budget carrier Ryanair indicated Wednesday it does not plan to pay compensation to passengers other than lost ticket costs.

The European Union's top official for transport had said Monday that airlines were responsible for taking care of them while they were stranded.

The crisis began after the volcano beneath the Eyjafjallajokull glacier erupted Wednesday and sent a cloud of ash into the atmosphere. By the next day that cloud had reached Europe, where authorities quickly closed the airspace over safety fears.

Airspace was being closed based on theoretical models, not on facts. Test flights by our members showed that the models were wrong.
--Giovanni Bisignani, IATA
RELATED TOPICS

Volcanic ash can shut down engines and electrical systems and damage a plane's windscreen.

By Tuesday, however, airlines had started to complain that the measures were too restrictive.

Ash levels in most parts of Europe, they said, were low enough to allow the safe operation of flights.

Scientists in Iceland said Wednesday the volcano has decreased its ash output by 80 percent compared to the first day of eruption, April 14.

"Airspace was being closed based on theoretical models, not on facts," said Giovanni Bisignani, director general and CEO of IATA. "Test flights by our members showed that the models were wrong."

He said the EU's decision to categorize airspace based on risk was a "step in the right direction," but Europe still needs uniform rules on air travel to avoid a repeat of the chaos of the past week.

NATS, the air traffic authority in Britain, said it is confident it had made the right decision in restricting flights.

"The primary concern for all the people involved -- the regulator, the government, and NATS -- has been to ensure flight safety," NATS Senior Manager Alex Bristol told CNN. "Until such time as we had evidence to give us different assurances, then the regulations which existed, and which we were using eight days ago ... then we had to restrict the airspace, and we did the right things."