New-style trips with the grandparents 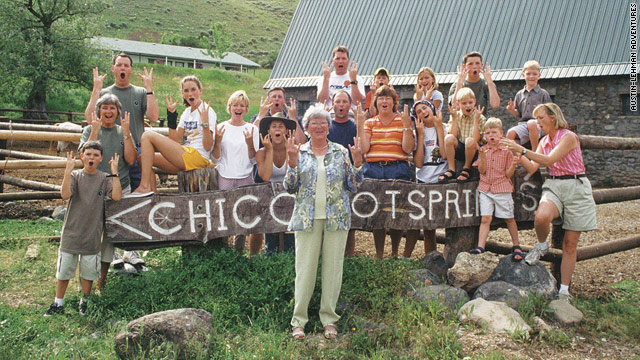 At Chico Hot Springs Resort, Eunice Bruggemann and her family give a salute to Austin-Lehman Adventures.
STORY HIGHLIGHTS
RELATED TOPICS

My nearly 3-year-old son Matt was methodically smashing coconuts on the stone terrace next to the pool of our rented villa in St. Martin early in the morning just under the window where my sister and brother-in-law -- still kid-less -- were trying to sleep.

We thought it was hilarious; they weren't amused. My parents just wanted to enjoy the sunshine and the grandkids -- Matt and his baby sister, Reggie.

That was the first of our many multigenerational vacations, all the more poignant because my dad died a few months later. Maybe that's why we still talk so much about that trip -- the seafood feasts our housekeeper whipped up, seemingly effortlessly for us, the hours my dad, already ill, spent playing in the pool with the kids, the stellar snorkeling and gambling expeditions led my Dad to a nearby casino, the bug bites that covered my 8-month-old daughter, and, of course, the Morning of the Coconuts.

At the time, it all seemed pretty exotic for our family. My mom had plucked a tiny ad from the New York Times and, sight unseen, (no Internet virtual tour in those days, no TripAdvisor reviews), had rented the place overlooking the ocean for two weeks. It wasn't quite what we expected, but that's another story.

What the gathering provided was unfettered time together to laugh and play and eat -- time we didn't usually have because we lived thousands of miles apart.

Today, more than 20 years later, grandparents and tour operators tell me, that's still what's driving other families like ours to corral their families on multigenerational trips.

What's changed is the kind of trips available.

As baby boomers become grandparents and seniors become more active, families are opting for more far-flung and active adventures -- fishing in Alaska, horseback riding at dude ranches, snorkeling off the coast of the Big Island of Hawaii, setting up camp -- literally -- at tree houses in the U.S. Virgin Island -- some returning with grandkids to where they honeymooned, or sailing charters in the Caribbean rafting and hiking in Colorado touring Israel and Africa with a gaggle of grandkids, even shopping New York City's vintage stores.

"We had so much fun ... and spotted my oldest daughter's senior prom gown!" said Anna Mae Kremps, who lives near Pittsburgh. Thanks to the transportation arranged, Kremps said, "This 70-something grandma was able to keep up."

The Alaska fishing trip that included 78-year-old Pauline Hill and her 16-year-old grandson was such a hit that the family is returning this year and bringing along friends, reports Hill's daughter-in-law Pam from her home in Colorado.

These grandparents "are generally a fitter and more experiential-oriented travel crowd than their parents. So they are happy to take their grandchildren on 'adventures,' especially when they might have the opportunity to get a massage or go to yoga at the end of the day," observes Paul Lehman of Austin-Lehman Adventures. His company is booking more of these trips, including an Adventure Bar Mitzvah to Israel. Often, the grandparents pick up the tab, too.

And this may be the time to do it, says Gabe Saglie, senior editor of TravelZoo.com. "In terms of that bucket trip, do it now. We have not seen prices like this in a long time, if ever," he says, adding that you can negotiate even better deals when you've got a group.

The best part is you might be able to arrange a specific itinerary geared just for your family, as the Crews did when they took their family -- 14 of them -- to Tanzania with Wildland Adventures to celebrate their 50th anniversary.

The Crews, incidentally, who live near Tampa, are a well-traveled couple, but said Jeri Crews, this trip with the nine grandkids was the most rewarding they've ever had. "It was a real adventure," she explained. "Each member of the family got something out of it and it was so thrilling to see the children discover things they hadn't ever thought of, or knew existed." One grandson, in fact, won a speech contest for recounting his visit to a village school.

Of course, there are plenty of less exotic offerings, including YMCA camps like the YMCA of the Rockies with plenty of organized activities.

And families are still cruising -- so much so that they represent one of the fastest growing segments of the cruise industry and cruise lines, like Norwegian, court them with everything from connecting rooms and suites (see the amazing options on Norwegian's new EPIC coming this summer) to family reunion packages aboard Holland America and family memories deals on Crystal Cruises. The more rooms you book, the more perks you receive.

Families are still renting houses together, too -- everything from cabins on a private Minnesota island, where we hosted more than one multigenerational summer trip, to a South Carolina beach via Wild Dunes where there are new "Family Matters" packages that offer 20 percent off villas for seven days, along with other perks to deluxe and budget European and Caribbean manses. Learn more at hideaways.com and homeaway.com.

The good news is the travel industry continues to rev up incentives. For example, Delta Vacations has initiated a new Flexible Getaways plan to let travelers who book a group save up to $200 per booking, even if they are traveling from different places on different dates.

It seemed nearly every family I encountered on a recent trip to Walt Disney World included grandparents -- their children grateful to have extra adults to keep an eye on the kids and maybe even babysit.

I even met one four-generation family from Canada visiting Orlando to celebrate a 59th anniversary, the great-grandparents sporting bride and groom Mickey and Minnie ears. "We even did a hot-air balloon ride," said granddaughter Bridget Westgate.

Jeri Crew, meanwhile, doesn't regret a penny of the very hefty tab for the Tanzania trip. "We have always felt that travel is a very important part of their educations," she explained.

Marine biologist Judith Weiss discovered that snorkeling with her granddaughters in Hawaii gave her a chance to share her passion and knowledge. They "were fascinated and it was great to be able to talk with them about the underwater life," she said. "Their parents were also interested!"

As for us, the grandparents sadly are gone, but we're continuing the tradition with the littlest members of the family this summer -- on an RV trip in Colorado.

See you at the campground.

(For more about Eileen's family adventures, read her trip diaries at www.takingthekids.com and also follow "taking the kids" on www.twitter.com, where Eileen Ogintz welcomes your questions and comments.)