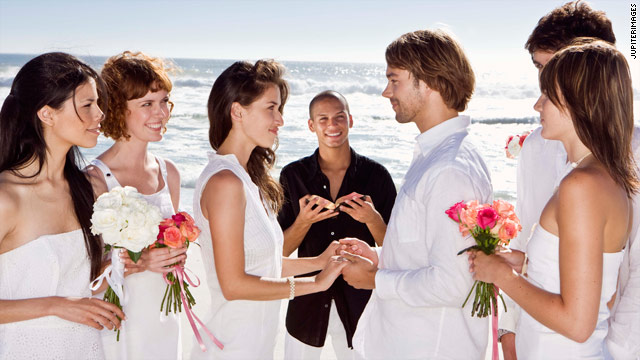 A wedding in a beautiful faraway locale can delight the couple but put extra financial stress on guests.
STORY HIGHLIGHTS

(CNN) -- The Loire Valley in France is one of those perfect spots for couples to say "I do," so Stephanie Hare saved for months for a wedding -- but it wasn't her own.

Her best friend from high school chose the lovely wine region to get married last spring, and when the invitation arrived, Hare reluctantly began the calculations.

She figured it would cost her $1,500 for the flight to Europe and a room at the chateau where the wedding party was staying.

But after talking to her parents and the bride -- who made her feel a little guilty, Hare said -- she decided to skip going out with friends and eating at restaurants for a frustrating few months to save up the money.

It's a dilemma many people on guest lists are facing as more couples fall in love with the idea of a destination wedding, which requires most (if not all) involved to pack up and head to a beautiful locale for the ceremony.

Twenty percent of couples now hold destination weddings, according to TheKnot.com & WeddingChannel.com 2009 Destination Weddings Study. Some do it to keep the guest list down, but for many, it's simply a matter of juggling the geography, said Rebecca Dolgin, executive editor of TheKnot.com.

"In a lot of weddings, the bride is from one place, the groom is from across the country or someplace completely different, and what they do is, they get married in a neutral territory," Dolgin said.

Sometimes, that territory can create some unique headaches.

Steve Tozin and his fiancée were planning a wedding in Cancun, Mexico, last year when regional instability got in the way. He's from New York, she's from Chicago, and they loved the idea of getting married at a lovely resort. Their guests were enthusiastic, but then a wave of drug-related violence struck Mexico, prompting some grisly headlines.

"Friends and family would read these articles, and they would flip out," Tozin, 33, recalled. "They would say, 'My God, you're really getting married down there?' even though it was nowhere near Cancun."

• Florida, California and Nevada are the most popular domestic sites.

• Caribbean, Mexico/Baja and Hawaii are the most popular sites outside the continental U.S.

• The average number of destination wedding guests is 77 (compared with 150 for other nuptials).

So a few months before the wedding, the couple switched locations to Florida and got married on Amelia Island instead.

Worries about faraway places are just some of the gripes that wedding planner Nancy Barkley hears from the friends and families of couples who choose exotic locales for their vows.

Barkley, the owner of Honeymoons and Get-A-Ways in suburban Philadelphia, Pennsylvania, said she feels "like a priest" sometimes as guests secretly vent to her about having to attend a destination wedding.

"[Some say] 'I can't believe they chose that hotel. It's so expensive. What are they thinking?' " Barkley said.

"Some people just don't travel ... [and] sometimes I just really think it's the fear of the unknown. You're doing a wedding in Costa Rica, and you might be inviting an aunt who lives somewhere in the Midwest and who has never been on a plane before."

Another common, potentially touchy situation comes when the parents of the bride or groom are divorced and are essentially forced to spend a vacation together when they attend a destination wedding, Barkley said. If one brings a significant other, things can get even more awkward.

For most guests, though, the biggest dilemma usually comes down to time and money.

Rebecca Seitz never expected to miss this weekend's wedding of her college roommate, a friend who served as a bridesmaid at her nuptials. But the ceremony is taking place in the Netherlands, and Seitz and her husband live in Baltimore, Maryland, so they would have had to shell out $800 each for airfare alone and be able to stay just a few days.

"It's not really worth it to spend almost $2,000 for tickets when I'd rather wait and go to Europe or any destination for a longer period of time," Seitz, 28, said. "If she were getting married here, I would go without hesitation. It was kind of sad to get the invitation."

So, what do you do if you're stressed about being invited to a destination wedding or you're a couple thinking of having one? Here are some tips:

• How can couples avoid any unnecessary friction? Barkley, who has been planning destination weddings for five years, asks her clients to make a list of absolutely-must-be-there guests, like parents and best friends, and check with them whether they will be able to come before starting to make any plans in faraway places.

"The last thing you want to do is get six months into [the planning] and then have somebody back out," Barkley said.

• Do guests still need to bring a gift? Not necessarily. "It's expected that if you're going somewhere, the gift would be a little bit smaller," said TheKnot.com's Dolgin. "In some cases, it's completely forgiven if there's not a gift. Your gift is to be in attendance at the wedding." Hare, for example, did not bring a gift when she attended her friend's nuptials in France. If you want to bring one, it could be in the price range of a shower gift: $35 to $65, Dolgin said.

• Will the couple pay any hotel or airfare expenses? Not likely. Barkley said guests pay for themselves in 90 percent of the cases. The bride and groom offering to pay for someone to attend would be a wonderful gesture, but it's not expected, Dolgin said.

• How should you tell a couple if you can't attend? Be open and honest, Dolgin advised. "If you can't spend the money or you can't get the time off, it's important to communicate that because that's understandable," she said. In the RSVP, you can write something along the lines of: "I'm really sorry, but things are tight. We'd love to be there with you, but we're not able to make the trip. We're thinking of you."

Have you struggled with whether to attend a destination wedding? Let us know in the comment section below.