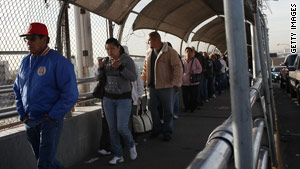 People wait in line at the border of the United States and Mexico.
STORY HIGHLIGHTS
RELATED TOPICS

Washington (CNN) -- The U.S. State Department on Thursday extended a travel warning that had been issued for Mexico because of the region's high level of drug and gang violence.

The State Department warning also notes that the authorized departure of family members of U.S. government personnel from U.S. consulates in the northern Mexico border cities of Tijuana, Nogales, Ciudad Juarez, Nuevo Laredo, Monterrey and Matamoros has been extended.

The State Department issued similar warnings in March and April.

The Mexican government said in April that more than 22,700 people have been killed in drug-related violence since December 2006, when President Felipe Calderon declared war on narcotraffickers.

"While most victims of violence are Mexican citizens associated with criminal activity, the security situation poses serious risks for U.S. citizens, as well," the State Department warning says.

Much of the recent violence has occurred in northern Mexico, where two drug cartels have been waging a bloody war since January.

The area, which borders Texas, has seen ferocious fighting between the Zetas and Gulf cartels after a recent gangland slaying. Hours-long gun battles are common, and U.S. officials were forced earlier this year to temporarily close the consulate in Reynosa, a city in Tamaulipas state.

Ciudad Juarez remains the most violent city in the nation, though.

"Since 2006, three times as many people have been murdered in Ciudad Juarez, in the state of Chihuahua, across from El Paso, Texas, than in any other city in Mexico," the State Department travel warning says. "More than half of all Americans killed in Mexico in FY 2009 whose deaths were reported to the U.S. Embassy were killed in the border cities of Ciudad Juarez and Tijuana."

"Recent violent attacks and persistent security concerns have prompted the U.S. embassy to urge U.S. citizens to defer unnecessary travel to Michoacan and Tamaulipas, to parts of Chihuahua, Sinaloa, Durango and Coahuila and to advise U.S. citizens residing or traveling in those areas to exercise extreme caution," the warning says.

The Zetas, composed mostly of former elite military troops, had been the armed enforcers for the Gulf cartel since 2001. They have become more independent in recent years, and authorities say the all-out war between the two cartels indicates the split is permanent.