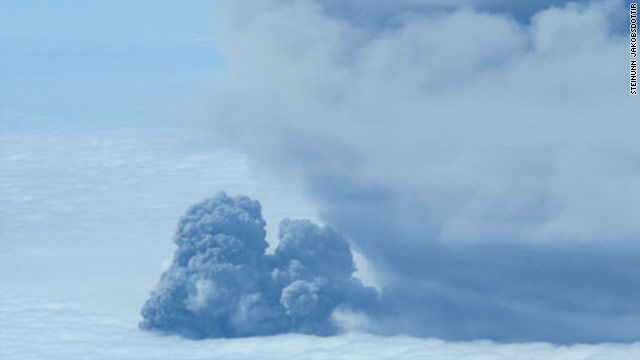 A picture taken by an Icelandic test flight over the volcano on Saturday 22nd May shows less ash and more steam being ejected.
STORY HIGHLIGHTS

London, England (CNN) -- The Icelandic volcano that has been disrupting thousands of flights with its ash plume has significantly reduced in activity, according to the Icelandic Meteorological Office.

No ash was detected from the Eyjafjallajokul volcano on Sunday in a flight over the crater by Icelandic scientists.

Jonsson Thorsteinn, an Icelandic Met Office forecaster, told CNN: "The volcano appears to be dormant, the activity has been going down for the last two days and at the moment there is nothing coming out... no magma."

Measurements with a heat camera from the test flight indicated that the temperature at the crater was just under 100°C, confirming that the volcano was now spouting steam instead of ash, Thorsteinn said.

Steinunn Jakobsdottir, a geophysicist with the Icelandic Met Office, told CNN: "Seismic activity is down, there is still some background rumbling but it is much calmer."

Jakobsdottir said the Sunday test flight data found that the "volcanic tremor is still decreasing and is approaching the level it had before the eruption."

However, scientists warn that the volcano could erupt again and that it was impossible to predict when.

"There is still something going on inside, some tremors, it is possible it could erupt again, but when is a question nobody can answer," said Jonsson Thorsteinn.

The slow down in volcanic activity is good news for commercial airlines and millions of passengers planning to fly in the near future.

The volcano beneath the Eyjafjallajokull glacier in southern Iceland erupted in mid-April, sending a dense cloud of ash into the atmosphere, disrupting international travel for several days.