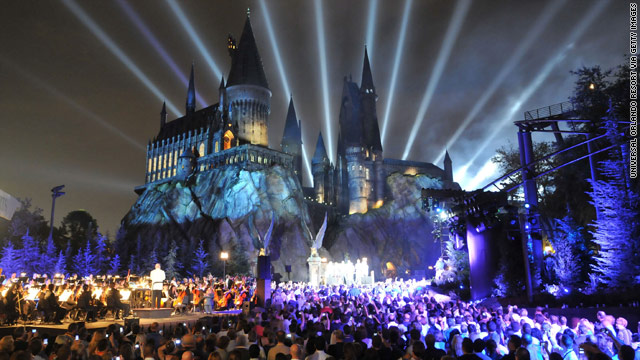 Universal Studios celebrates the opening of the "Wizarding World of Harry Potter" in Orlando, Florida, on Thursday. The attraction officially opens to the public Friday.
STORY HIGHLIGHTS

(CNN) -- The day Harry Potter fans have been waiting for is here. On Friday, Universal Studios is opening its "Wizarding World of Harry Potter" attraction at Universal's Islands of Adventure theme park in Orlando, Florida.

The park-within-a-park, as it's being called, recreates various locations, scenes and other elements from the wildly popular book and movie series. Harry Potter has beaten out fellow Brit celluloid character James Bond as the top-grossing film series in history.

One of the reasons Harry Potter is so successful is its legions of fans, both young and old.

Alex Black is one of them. She and her family made a special trip to Orlando from Georgia to be guests at a "soft opening" of the park a couple of weeks ago.

She was one of the first to catch a glimpse of Hogwarts, the fictional boarding school for young wizards, and to drink some "butterbeer" at the attraction.

According to 16-year-old Alex, "it's worth waiting hours in line, it's worth the money, it's worth the long drive from Georgia, it's beyond worth it." When asked what her favorite part of the park was, she responded, "Everything was my favorite."

Alex, like millions of other "muggles" around the world, has been a long-time fan of the boy wizard, Potter, and his best friends Ron Weasley and Hermione Granger, since the first author J.K. Rowling's seven-book series debuted.

"I've grown up with Harry Potter. I've brought all the books they came out, I dressed up for Harry Potter spirit day at my school. And when I'll be a senior, the last (movie) -- when Harry is like that age, as a senior -- will come out. So, he's kind of like the family pet in a way," she said.

And it's not just the teenagers who are just wild about Harry.

Laura Boyles, a 55-year-old mother and book store employee from Orlando, said, "I can't wait to go to the park -- I'm so excited for it to open. I love the Harry Potter series."

Alex is happy that the Wizarding World opened when it did. "When I read the last book it was almost like the end, I still had the movies, but I was afraid it would be over, but the park is a way for it to live on."

Widespread industry speculation has it that Universal shelled out some $265 million for this Potter project, although officials are not confirming that number.