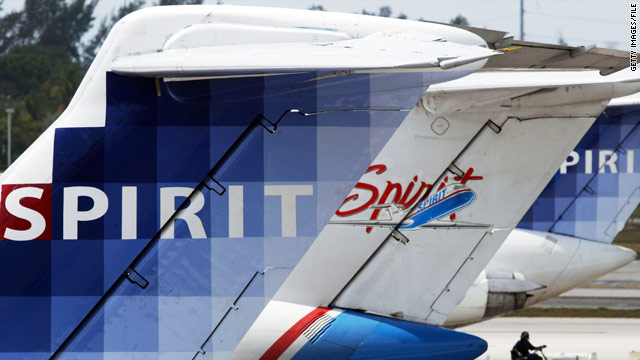 It isn't the first time the discount air carrier has found itself in the headlines because of its advertising.
STORY HIGHLIGHTS
RELATED TOPICS

(CNN) -- A new advertisement posted on Spirit Airlines' website Tuesday has tongues wagging -- and not because of the scantily clad women it features.

The ad -- promoting a $50 discount on travel to the carrier's coastal destinations -- appears to make light of the ongoing BP oil disaster in the Gulf of Mexico.

In it, a series of photos of tanning-oil-drenched women in bikinis appears with the slogan "Check Out The Oil On Our Beaches."

The slide show, featuring destinations in Cancun, Mexico; Fort Lauderdale, Florida; San Juan, Puerto Rico; and Atlantic City, New Jersey, culminates in a closeup of two green-and-yellow bottles of "Best Protection" 50 SPF sunscreen, with the B and P highlighted to stand out.

The ad campaign prompted outcry from news media to Twitter, with people calling it "offensive," "tasteless," and "a remarkably poor ... choice."

Miramar, Florida-based Spirit issued a statement on its website in response to the criticism shortly after the ad appeared.

"It is unfortunate that some have misunderstood our intention with today's beach promotion," the statement said. "We are merely addressing the false perception that we have oil on our beaches, and we are encouraging customers to support Florida and our other beach destinations by continuing to travel to these vacation hot spots."

Notably, the one Gulf Coast destination that Spirit flies to -- Tampa, Florida -- is not featured in the ad campaign.

It isn't the first time the discount air carrier has found itself in the headlines because of its advertising.

A 2006 promotion by the company prompted CNNMoney to include it on its list of 101 Dumbest Moments in Business. The "Hunt for Hoffa" ad asked visitors to the airline's website to "dig" for the remains of the missing union leader Jimmy Hoffa in an online game. "Help us find Hoffa ... and enjoy fares from just $39 each way," the ad read. Besieged by complaints, the airline dropped the promotion soon after.

Last summer, the airline launched a promotion called the "We're No Virgin" sale. The slogan? "We've Been Cheap and Easy for Years."