Hot summer deals in the Caribbean 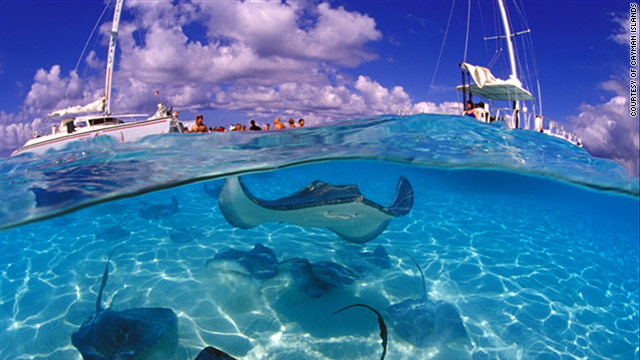 Editor's note: This story is part of Eileen Ogintz's Taking the Kids series. Follow "taking the kids" on www.twitter.com, where Ogintz welcomes your questions and comments.

It's a Sunday favorite with locals, but tourists in the know like it too. "Don't tell anyone about this place," jokes Marshall Bonds, who rented a condo nearby with his family.

There's also plenty beyond the beach for the kids to do on the Cayman Islands, like the chance to learn new tricks at the Black Pearl Skate Park, the second-largest skate park in the world.

Or you can visit the Blue Iguana Recovery Center (yes they really are blue and were nearly extinct just three decades ago) or tickle green sea turtles at the Cayman Turtle Farm at Boatswain's Beach. (Kids admission is free per one paying adult.) Our entertaining guide at the Turtle Farm, Tim "Reds" Akers, tells us that from here some 30,000 sea turtles have been released back into the wild over the years.

This summer, take the kids to free Sea School with SpongeBob Square Pants where they might also learn about historic shipwrecks, Caymanian culture or marine life.

The best part: You might even snare a bargain -- with island-wide family deals like Cayman Summer Splash, which includes a free night when you pay for four, 30 percent off on kids (under 12) flights on Cayman Airways, free entrance for kids at many island attractions, free meals at restaurants, free diving rental gear for kids up to 17 and half off on dives and free open water certification when kids are accompanied by an adult.

Despite high airfares (which incidentally will be no bargain whether you fly to California or the Caribbean), the Caymans aren't the only islands trying to lure families to their beaches.

St. Lucia has launched a family "Go Bananas" package that includes free meals for kids under 17, a complimentary room upgrade, a complimentary excursion, a Kids Education day at Pigeon Island National Landmark to learn about St. Lucia's legends, an island-wide discount card and -- my favorite -- a complimentary night of babysitting. St. Kitts has "fall in love with St. Kitts & Nevis" with free night offers and special kids' discounts.

"If people are willing to shell out for airfare, there are great hotel deals in the Caribbean this summer," says Jaime Samuels, publisher of Travelzoo.com's Newsflash. Samuels suggests looking for packages from Miami that include airfare. To get the most bang for your buck, it may be cheaper, she suggests, to grab a flight to Florida and let the deal guide where you go from there.

"Getting there is the main challenge," says Mike Thiel, founder of www.hideaways.com. "Airfares continue to stay higher than in past years as planes fly full every day." The good news, he adds, is that once you find a flight, you will have your pick of deals -- as much as 40 percent off on villas, for example -- with plenty of extras at resorts. (Free massage? Golf lessons?)

Look for packages that include free nights at reduced summer rates (pay for two and get two free at the Viceroy Anguilla), free diving for kids and teens (Captain Don's Habitat in Bonaire), free excursions to the Maya Ruins and Rainforest (The Inn at Robert's Grove in Belize, ) and more. TripAdvisor data suggests that hotel prices are as much as 30 percent lower than they were this past February and March. (Check out TripAdvisor's new Trip Friends feature, for advice on locales from Facebook friends.

If kids are traveling with you, you will probably save the most at all-inclusives, says Travelzoo's Samuels. For example, Antigua's Elite Island Resorts offers a "pay for one and bring up to four" deal that's a little more than $100 a night per person. Divi & Tamarijn Aruba let two kids up to age 17 stay and eat free when accompanied by two adults. For single parents, theOccidental Grand Aruba invites up to two kids 12 and under to stay free with one parent. The U.S. Virgin Islands' Wyndham Sugar Bay Resort has just become St. Thomas' only all-inclusive -- with deals as much as 60 percent off.

Troll for deals on online travel auction sites like www.familygetaway.com or www.jetsetter.com. Become friends or fans of favorite resorts on Twitter and Facebook. For example on Twitter, Jet Blue has @jetblue and @jetbluecheeps and offers regular last-minute deals.

Of course, you'll save the most if you book a villa or condo where you can spread out, cook some of your meals and perhaps split costs with friends or extended family. Consider Mexico where you might get a cheap airfare and lodging deals south of Cancun in Playa del Carmen that start at just $215 a night -- (30 percent off luxury condos) or try Casa De Los Primos in Akumal, which offers some of the best snorkeling along the Yucatan Peninsula.

Fun in the water doesn't necessarily end when the sun sets either. On our last night in the Cayman Islands, we kayak after dark -- on a luminescent bay. When our paddles hit the bay it's as if we're writing on the water with glow-in-the-dark crayons, as minnows glow around us. Water dripping through our fingers glistens and the water appears to sparkle, mesmerizing the teens ... for a while at least. I lean back in my kayak and smile. Even in paradise, you don't get too many picture-perfect moments -- not when you take kids along.

(For more on Eileen's trip to the Cayman Islands and elsewhere in the Caribbean, read her trip diaries at www.takingthekids.com and also follow "taking the kids" on www.twitter.com, where Eileen Ogintz welcomes your questions and comments.)