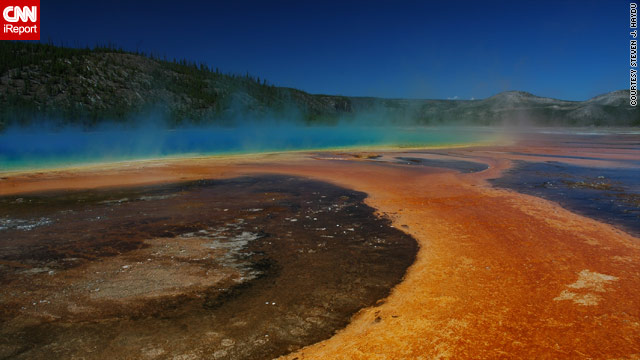 (CNN) -- A record number of vacationers found a way to escape the sizzling heat in July: head to the cooler climates and natural beauty of Yellowstone National Park.

The month's total of more than 957,000 people topped last July's numbers by almost 60,000, the office said. In fact, the July total almost equaled the number of people who came in the first six months of the year combined. July is typically the park's busiest month.

This year also marked the first time in Yellowstone's history when visits during the first seven months of the year topped 2 million.

Although all four of the park's entrances saw more visitors passing through their gates this year, the West Entrance, near the town of West Yellowstone, Montana, proved the busiest, with almost 400,000 visitors in July. The East Entrance, about 60 miles from Cody, Wyoming, saw the greatest increase from last year at 9 percent.

Throughout July, the public affairs office said, visitors usually found that "all park lodging and campgrounds were reporting 'full' by mid-morning."

The current record for most visitors in a year is 3.3 million, set last year. That broke a record set in 2007.

Most of the park's 2.2 million acres are in Wyoming, but narrow sections are in Montana and Idaho.