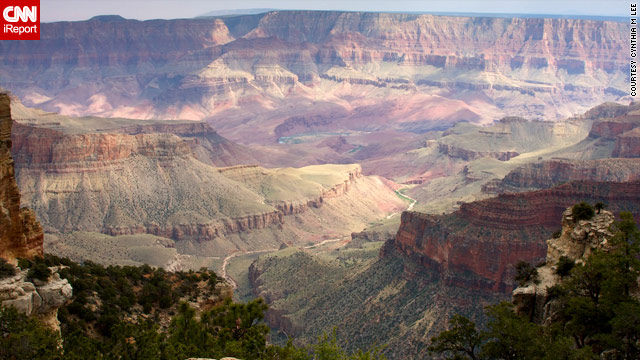 Parts of the Grand Canyon attract millions of visitors a year, the equivalent of a "big city," says one park advocate.
STORY HIGHLIGHTS
RELATED TOPICS

(CNN) -- The majestic views overlooking the Grand Canyon make it one of America's favorite destinations, but a new report finds several man-made threats are contributing to the deterioration of Grand Canyon National Park.

Scientists and park staff working on the "State of the Parks" Grand Canyon report highlight areas and resources in the park that are threatened, the history of those threats and what can be done to correct them.

What they found is a national park that continues to decline from factors ranging from climate change to mining to aircraft flyovers as well as management of the Colorado River upstream from the canyon.

They're all having a negative impact, said David Nimkin, southwest regional director of the National Parks Conservation Association, which conducted the study.

"What people don't often know about the park is how threatened it is," he said. If action isn't taken, "the conditions at the park will continue to deteriorate," Nimkin added.

The Colorado River, the very force that helped create the canyon in the first place, is one area of concern.

The river flow through the canyon "has been profoundly impacted by management decisions upstream" when the Glen Canyon Dam was built creating Lake Powell, Nimkin said.

That's had a direct effect on wildlife habitat downstream, not to mention the impact to park users who frequent the river, Nimkin said. The solution can be found in science, he added.

Climate change is also on the radar of park officials.

"In the Southwest, many scientists agree they will be experiencing more extreme levels of drought. Obviously that affects the river and the habitats through the five ecozones of this massive park," Nimkin said.

For 20 years, flights over the Grand Canyon have provided a breathtaking experience for visitors, but Nimkin said they're taking a toll on the park.

"It's been at the expense of natural quiet," he said. "People who come to enjoy the solitude and magnificence of the Grand Canyon are impacted by the sounds."

Nimkin said officials have been looking at ways to balance that experience with visitors' needs. But the aircraft noise also has an impact on wildlife. "They can't hear predators, and it affects some of their mating habits," he said.

Uranium mining is also listed as a threat to the Grand Canyon in the report.

Nimkin said, "In this very dry region, all the water is so crucial to wildlife and human life, and the impact of uranium mining on the seeps and streams, surface water and groundwater is quite significant."

The report calls for advocating and promoting legislation that's been initiated in Congress to restrict mining within the watershed of the Grand Canyon.

"If we don't really address the problems of soundscape, water contamination from mining and we don't use the science that clearly demonstrates how the river can be managed in ways that provides a balance for multiple users then we're going to lose one of the most incredible landscapes that we have in our country," he said.

The report calls for increased financial support from the federal government is needed to maintain the park experience for visitors and to plan for the future of the Grand Canyon National Park.

"We think about the fact that we have almost 5 million visitors a year, most who come to the South Rim of the park. That's a huge city," Nimkin said. "The ability of this park to be able to support the infrastructure, interpretive rangers, trail maintenance and public safety is quite significant."

He added, "The Grand Canyon National Park is like no other place on Earth. We do have the responsibility and opportunity to take measures and protect this place."