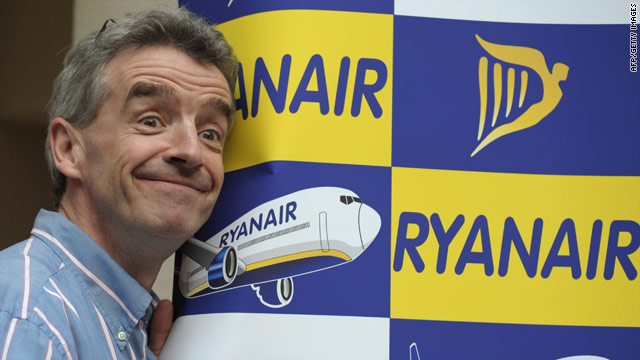 (CNN) -- He's already suggested installing coin-operated lavatories and selling standing room on flights, so it may not be surprising that the latest idea from the colorful CEO of Ryanair is once again pushing air travelers' buttons.

It's not necessary to have two pilots on every flight, Michael O'Leary said in a recent interview.

"Let's take out the second pilot. Let the bloody computer fly it," O'Leary told Bloomberg Businessweek, adding that a flight attendant on each flight could be trained to help land a plane if something goes wrong.

"If the pilot has an emergency, he rings the bell, he calls her in," O'Leary told the magazine. "She could take over."

O'Leary also revisited the idea of offering passengers the option of standing on flights in a cabin equipped with handrails, which would reduce fares by up to 25 percent, he said.

(The possibility of air travelers standing on board planes has been dismissed by aviation experts. Even "vertical seats," which would let passengers stand while being strapped in, would have a hard time becoming a reality, according to a BBC analysis this year.)

Ryanair, which is based in Dublin, Ireland, is known for its rock-bottom fares. It's also famous for its fees and is upfront about them on its Web site, which details charges for everything from online check-in to traveling with infants.

Meanwhile, O'Leary is infamous for coming up with and touting attention-getting ideas to make flying even cheaper -- a strategy that his detractors say gives the airline lots of free advertising.

Critics were quick to pounce on his latest comments.

"Are there no lengths to which he will not go to get publicity?" asked Jim McAuslan, general secretary of the British Airline Pilots' Association, according to The Telegraph.

"His suggestion is unwise, unsafe and the public will be horrified."