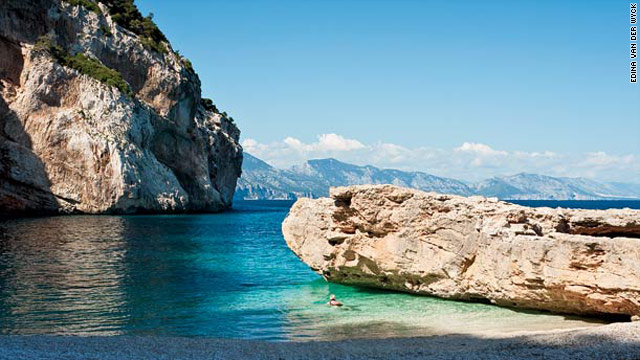 (Budget Travel) -- Striking expanses of coastline aren't exactly in short supply across the Mediterranean. But for some reason, only a few marquee spots -- the Greek Isles, the Amalfi Coast, the south of France -- get all the love. Chances are, Sardinia doesn't even make the list.

You might be tempted to think of the island, Sicily's neighbor to the northwest, as a microcosm of the Italian mainland, an outpost you might get to one day -- or not. But that would be a huge mistake.

For starters, Sardinians don't even speak Italian -- at least not as their first language. Instead, they converse in Sardo, with regional dialects that dominate in different areas -- plus, there's Catalan, which has held on for 600 years in the former Spanish port of Alghero.

Sardinian culinary influences are just as eclectic, pulling from French, African, Spanish, and Italian traditions. Meals revolve around fresh seafood or spit-roasted meats like lamb or suckling pig. Sure, there's pasta, but it's served with ragù and saffron or topped with bottarga (tuna roe). And the dessert of choice is not gelato, but sevada, a fried pastry filled with cheese and topped with bitter local corbezzolo honey.

What's more, Sardinia doesn't even look like the Italy you know. Where the mainland trades in picturesque villages and crumbling farmhouses, Sardinia is all dramatic landscapes and wide-open wilderness. Miniature horses roam the hilly interior, amid ruins of millenia-old stone fortresses called nuraghi.

And on the coast, pale-sand beaches flanked by limestone spires encircle the island like a crown. Which brings us to what's perhaps the most fun way to explore Sardinia: a tour of its best beaches.

Skip glitzy, crowded Costa Smeralda to the north, where talk centers around yacht maintenance and offshore bank accounts. Instead, head to the tiny turquoise coves of the Gulf of Orosei; remote, windswept Costa Verde; or the slightly busier (but wholly convivial) resorts near Stintino.

None of those beaches ever sees the kind of traffic that Santorini or Capri does. And by September, the few travelers that do make it are clearing out, leaving only white sand, blue water, and more than enough elbow room to go around.

Beaches to hit: The action centers on La Pelosa, whose wide shelf of warm, clear turquoise water could be mistaken for the South Pacific. Some folks take day trips to nearby Asinara island, a former penal colony turned national park with three swimming beaches and a population of wild white donkeys.

The vibe: A low-key locals' area with a deserted beach around every turn.

Beaches to hit: For privacy, head to Scivu, a broad, golden-sand stretch at the base of 328-foot dunes, and neighboring S'Acqua Durci, which has no road access. (Climb over the rocks at Scivu's north end to reach it.) Surfers favor the waves at 4.3-mile-long Piscinas to the north.

Where to stay: Brezza Marina rents 70 modern apartments in the town of Torre dei Corsari -- all with patios, barbecue grills and kitchenettes. Viale della Torre 10, Torre dei Corsari, brezzamarina.it, from $63.

The vibe: A quiet curve of coastline favored by intrepid Italian and German vacationers who are serious about their sunbathing. Expect pristine beaches reachable only by boat.

Beaches to hit: Hands down, Cala Luna is the most stunning spot in the gulf. The pale arc of sand is nearly half a mile long, bordered by a freshwater lagoon and hemmed by cave-pocked cliffs. Coastal ferries run by Nuovo Consorzio Trasporti Marittimi depart from Cala Gonone and stop here eight times a day. They also stop at Cala Mariolu, a calm swimming and snorkeling beach of smooth, white pebbles, and pass by the limestone towers of Cala Goloritzè. calagononecrociere.it, cruises from $19.

Where to stay: Half of the Hotel Nuovo Gabbiano's 16 rooms have balconies that overlook the port; guests with inland-facing rooms can get their sea views from a table on the restaurant's terrace. Piazza del Porto, Cala Gonone, hotelnuovogabbiano.it, from $105.

Getting There
Ferries from Rome's Civitavecchia port to Olbia or Cagliari on the island take from five to eight hours and cost about $130 round trip (ilportalesardo.it). Alternately, round-trip flights from Rome to one of Sardinia's larger airports, in Cagliari, Olbia or Alghero, start at $49 and take only about an hour. Several European airlines (including Meridiana and Ryanair) also fly direct between major European cities and Sardinia's airports.

Getting Around
Unlike in most of Italy, trains are scarce in Sardinia, and buses are inconvenient. Rent a car for about $60 a day (three-day minimum) from a consolidator like autoeurope.com; plan on spending at least twice as much time as you imagine you'll need to make any drive. Sardinia's roads twist and turn prodigiously (even for the Italian countryside), and it can take more than five hours to make the 210-mile trip from tip to tip.

Parking
Most beaches have small public lots that charge $3 to $4.50 per hour, but they're not always staffed outside the July-August high season.