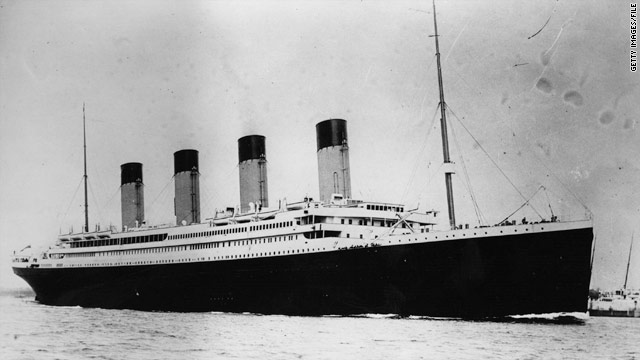 This 1912 photo shows the RMS Titanic, which struck an iceberg and sank on its maiden voyage across the Atlantic.
STORY HIGHLIGHTS
RELATED TOPICS

(CNN) -- The frigid waters of the North Atlantic aren't among the most prominent cruise destinations, but that may change as the world remembers one of the worst maritime disasters in history.

At least two cruises are planned in the spring of 2012 to coincide with the 100th anniversary of the sinking of the Titanic, with both touting special activities, lectures and memorials to commemorate the tragic voyage.

Organizers insist it's a learning opportunity and a way to remember the victims, but some critics have called the trips tasteless and dubbed them "disaster voyeurism."

Still, both voyages are attracting interest as Titanic -- the subject of countless books and movies -- continues to fascinate.

"Perhaps what makes it special is that its story, and that of the passengers who didn't survive their journeys, never did have a satisfying conclusion. And so that's why the ship continues to live on."

The Titanic Memorial Cruise on the Balmoral will retrace the doomed ship's original itinerary, departing from Southampton, England; passing by Cherbourg, on the French coast; and calling into the Irish port of Cobh before sailing across the Atlantic Ocean to the sinking site.

The ship will take 1,309 passengers on the trip, the same number of people who were on the Titanic.

More than 30 relatives of Titanic survivors and victims will be on board, said Miles Morgan, managing director of the cruise. He wasn't surprised the voyage has almost sold out, despite the grim occasion.

"An awful lot of the people are simply just really interested in the Titanic and everything about it and to them it's the opportunity of a lifetime to do something very, very different," Morgan said.

Sailing from the U.S.

Meanwhile, Voyages! Titanic 2012 is a cruise that's set to depart on the Azamara Journey from Boston, Massachusetts, on April 9, 2012.

The ship will take up to 680 passengers to Halifax, Nova Scotia -- which received many of the Titanic victims -- and then sail to the sinking site. It too will hold a memorial service on the anniversary to honor "that fateful day in history."

An expedition ship with a remotely operated diving vehicle will follow along so that, weather permitting, passengers will be able to see live images from the wreck, said organizer Bill Willard.

"There are people who have studied and researched and read and want to know as much as they can about what happened that night and about the people who were on board. This is their chance to touch something real about Titanic, to be at the site," Willard said.

Both cruises will recreate some of the menus featured on Titanic, and both anticipate that some passengers will dress up in fashions of the era.

Critics say a fun vacation is no way to commemorate a disaster in which more than 1,500 people died.

"There seems to be something rather tasteless about the whole affair," wrote Luke Turner, a British blogger. "This Titanic cruise ... smacks of disaster voyeurism."

In a forum discussion on CruiseCritic.com, a poster recently slammed passengers for planning to dress up and "party" on the somber anniversary.

The member, identified as "dd714," wrote that his wife's great-grandfather died in the disaster.

"Who will be taking a memorial plunge in the 30 degree Atlantic ocean at the place where he met his death 98 years ago to experience what was described by survivors as 'a thousand knives going into the body?' " the poster wrote last month.

"This Titanic relative will NOT be attending, and I only ask when you put on your Jack and Rose costumes [from the "Titanic" movie] and drink your martinis, to remember that it is still a fresh memory of loss to many families."

But Morgan countered that the victims' relatives who have booked his cruise consider it a wonderful opportunity to commemorate their loved ones.

Nothing about the cruises is in poor taste, Willard added.

"We're not doing this to be gaudy or to be crass, we're doing it with respect and reverence and keeping in mind the moment and the occasion that we're there for," Willard said.